In this installment of AppleInsider’s iPhone XS Max versus Google Pixel 3 XL comparison series, we take an in-depth look at video recording capabilities, from overall image quality to value-added features like stabilization and autofocus. 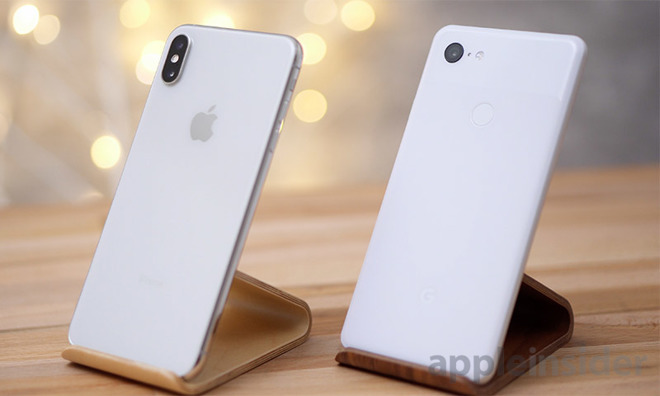 Both the iPhone XS Max and Pixel 3 XL have optical image stabilization on their rear-cameras, but we noticed something interesting with the Pixel 3. With digital video stabilization enabled, it crops in around 25 percent, meaning a good portion of the sensor is not being used.

Capturing 16:9 video on a 12.2MP sensor in a 4:3 pixel arrangement should use just over 8.3MP, which basically matches 4K resolution perfectly. If that same sensor is being cropped 25 percent, the camera could be shooting as little as 2.8K resolution and upscaling it to 4K; it’s not shooting true 4K like the iPhone XS Max.

Even though the Pixel 3 XL has the same Snapdragon 845 processor as the Galaxy Note 9, OnePlus 6 and other phones, it can’t shoot in 4K at 60 frames per second like those handsets. We are not sure why Google chose to exclude this feature, but our benchmark performance comparison showed the Pixel 3’s processor is clocked slower than competing Snapdragon smartphones.

Comparing 4K 30p on the Pixel 3 to 4K 60p on the XS Max, there’s a lack of contrast on the Pixel, making the XS Max look more detailed. If you look at the waterfall below, you can tell the white balance is way too blue, just as we saw in our photo comparison. 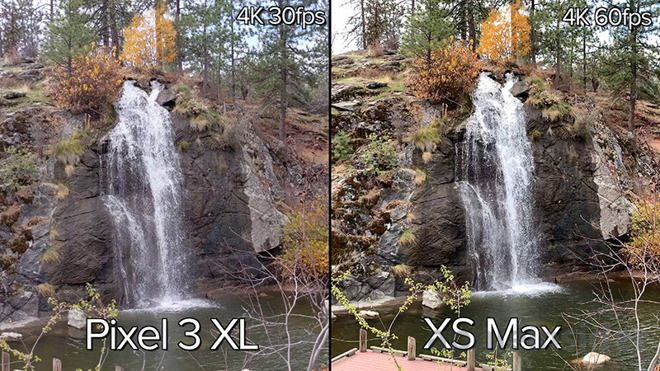 We tested audio quality using the front-facing camera and found the XS Max was loud, clear and the device capably reduced the noise of the waterfall. The Pixel 3 XL sounded tinny, quiet and overwhelmed by the noise of the waterfall. The iPhone XS Max is also able to record 1080p selfie video at 60 frames per second compared to only 30fps on the Pixel 3.

Next up, we tested the autofocus by panning the camera between the waterfall and a face. One thing we instantly noticed is that the Pixel 3 XL’s footage had a very noticeable jello effect when changing directions. Many digital cameras use what is called a rolling shutter to capture images, a process that significantly alleviates hardware and processing requirements. The byproduct, however, is the introduction of image artifacts like skewing and the aforementioned jello effect.

While examining the footage frame by frame, the Pixel 3 XL was first to catch focus on the face three times, while the XS Max was first three times as well. In each instance, both phones found focus within a couple of frames, so they’re basically identical in terms of autofocus speed.

We then tested rear-facing stabilization in 4K at 30 frames per second. Even with the 25 percent crop on the Pixel 3 XL, the iPhone XS Max still had noticeably better stabilization, so that’s a double win for the iPhone. 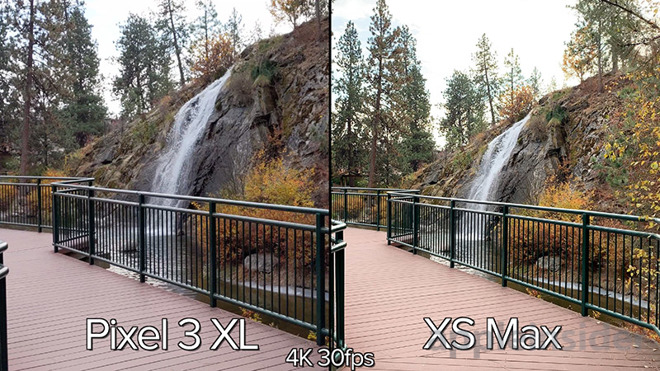 The Pixel 3 XL allows users to enable or disable front-side stabilization. The XS Max has no toggle for turning off stabilization, it just works all the time. With video stabilization enabled on both devices, we saw the XS Max outperform, with the background shifting noticeably less than on the Pixel 3.

Not only that, but the Pixel 3 XL focused on the background shortly after starting the clip and it never regained focus on the face. The XS Max was perfectly sharp and in focus the entire time. 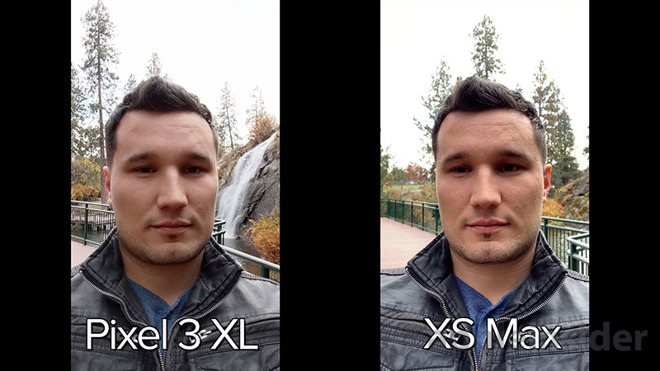 We then tested detail and HDR while standing still. With the Pixel 3 XL now in focus, we were able to see noticeably more detail on the iPhone XS Max. In terms of HDR, both did similarly well, except slightly more of the trees in the background were blown out on the iPhone.

Testing HDR on the rear-facing cameras, the XS Max was able to bring up the shadows in the trees and bring out more color than on the Pixel 3 XL. When shifting from the sky to the waterfall, the XS Max transitioned the exposure better than the Pixel, which kept the scene a bit underexposed. 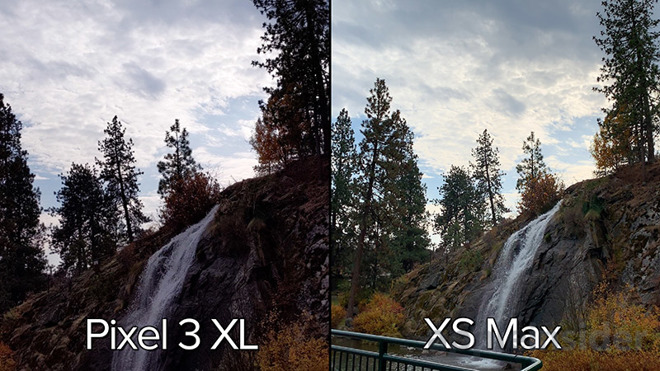 We also tested macro video quality on a leaf and the Pixel lacked contrast, making it look a lot less detailed than the XS Max. 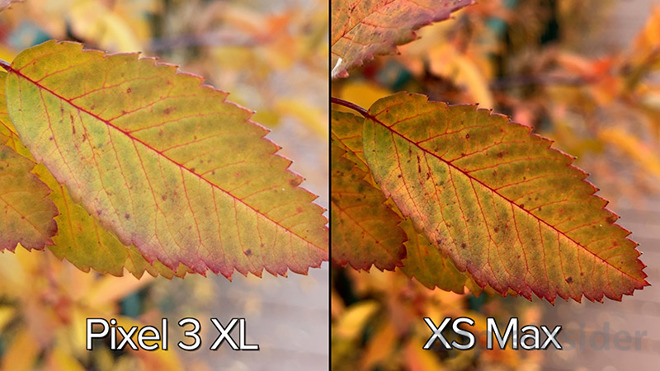 Testing detail with the wide lenses — with stabilization turned off on the Pixel 3 — there’s a huge lack of contrast with Google’s phone, making it seem like it’s less detailed. If we crop in on the sign, however, we see that the Pixel is actually slightly sharper than the XS Max. 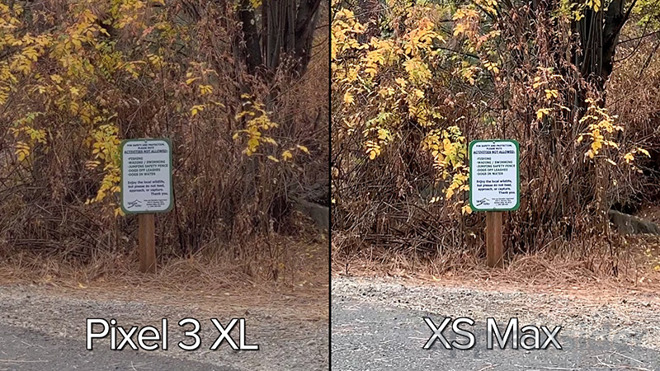 The XS Max also comes with a telephoto lens, allowing it to zoom in much closer than the Pixel 3 XL can with its single wide lens. For scenarios where you’re trying to record something further away, a telephoto lens is priceless. 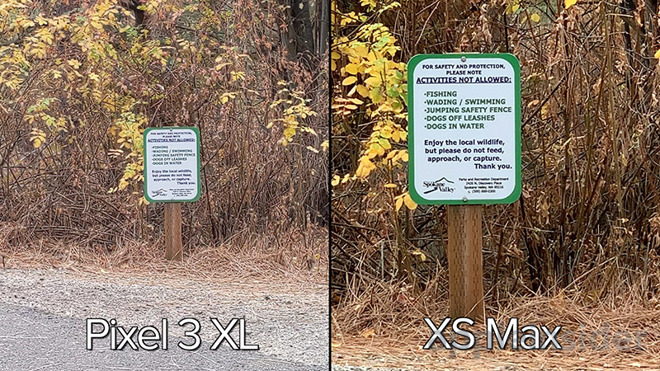 Shooting against the sun with a face in the foreground, the iPhone XS Max automatically detected the face and exposed properly for it. The Pixel 3 XL failed to detect the face and exposed for the sky, making it look extremely underexposed. We actually had to tap on the face on the Pixel 3 XL to get it to expose for it, but a few seconds later, the camera automatically exposed for the sky again. 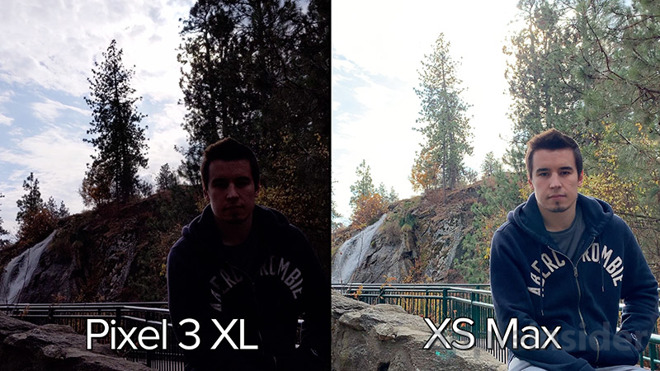 Pixel 3 fails to detect face and exposes for sky.

We also tested slow-motion on both devices, recording at 240 frames per second. The only difference is that the iPhone XS Max is able to record in 1080p resolution, while the Pixel 3 XL can only record in 720p. The difference in detail was huge, especially with the lack of contrast on the Pixel, making it look even less detailed. The XS Max is the clear winner for slow motion video. 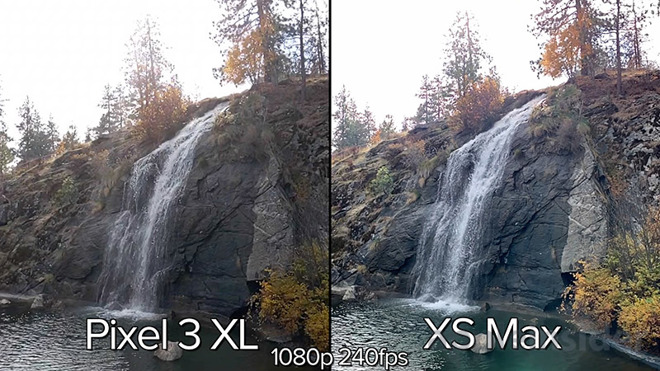 While testing, we spotted a rabbit and decided to zoom in as close as we could on both devices. With the iPhone XS Max’s telephoto lens, we were able to zoom in a lot closer, but we noticed a lot of noise in the footage. Combined with seemingly too much contrast, the video ended up looking pretty bad compared to the Pixel 3 XL’s footage. 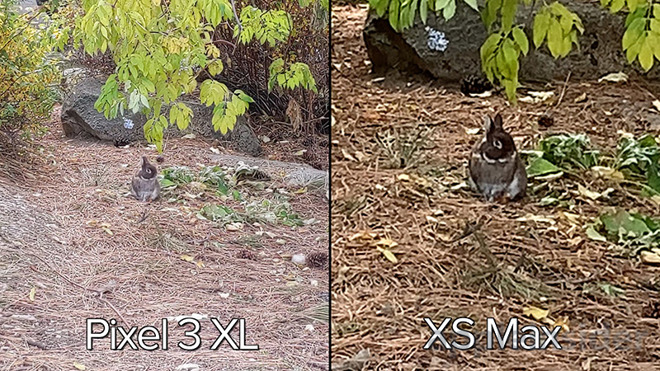 Both phones at maximum zoom.

Finishing off with a low light scene, the Pixel 3 XL exposed much better for the face, while the XS Max automatically exposed for the light bulb in the background, making the face look noticeably underexposed. We also noticed more noise on the iPhone’s image, but if you look closely, the iPhone XS Max was definitely more detailed. 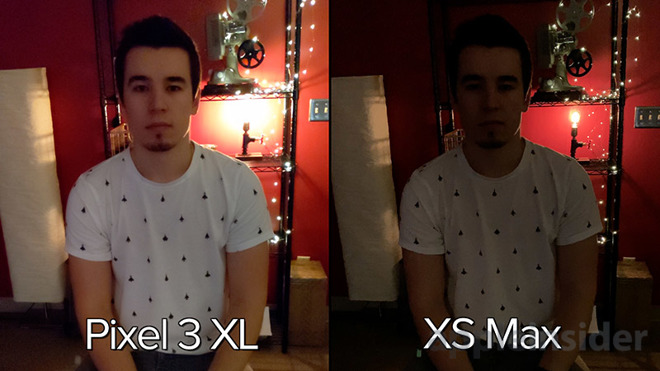 We saw the same results from the front-facing shooters. The XS Max again exposed too dark and you can easily notice more noise in the image. This time, the Pixel looked more detailed because of the lack of noise, so we’re definitely giving the win to the Pixel 3 XL for low light. 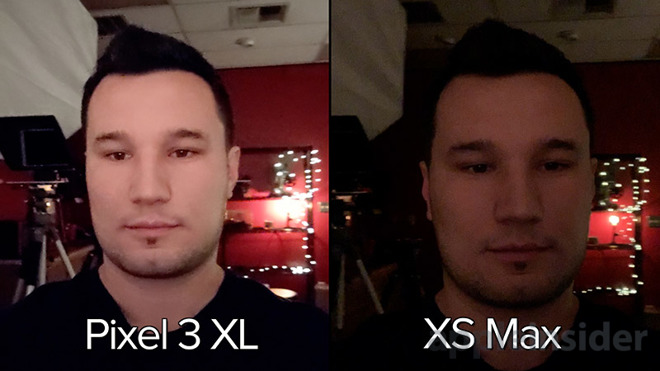 The white balance is more accurate on the iPhone and the microphone sounds much better as well. Autofocus speed was basically identical on both phones, but the Pixel 3 XL suffered from rolling shutter when panning, adding a distracting jello effect to the footage.

Both front and rear-facing stabilization were better on the XS Max. The Pixel 3 XL’s footage had a general lack of contrast, making it look less detailed, even if it was slightly more detailed at times. The Pixel also struggled with detecting a face and adjusting the exposure accordingly when the bright sky was behind the subject.

Deals on the iPhone XS Max and Google Pixel 3 XL

If you haven’t already ordered Apple’s iPhone XS Max, wireless carriers are incentivizing the purchase. Want to get your hands on a new device asap? eBay sellers are also shipping units now.

Those interested in purchasing the Google Pixel 3 XL can take advantage of a buy one Pixel 3 XL, get a free 64GB Pixel 3 offer at Verizon Wireless.