Democrats have quickly stepped up pressure to remove President Donald Trump from office, seeking first to call upon Vice President Mike Pence and the Cabinet to invoke the 25th Amendment; should that fail, House Dems appear ready to move on an article of impeachment charging the president with “incitement of insurrection.”

But also moving against the president were several big tech companies. Over the weekend, in one way or another, they “deplatformed” Trump and the social site Parler, which they claimed didn’t do enough to moderate incitements of violence. Those stocks – including Apple (AAPL, -2.3%), Facebook (FB, -4.0%), Amazon.com (AMZN, -2.2%), Google parent Alphabet (GOOGL, -2.3%) and Twitter (TWTR, -6.4%) – sold off heavily on Monday.

“News over the weekend reminded investors that the FAANG stocks could certainly see increasing regulatory pressure over the coming months,” says David Keller, chief market strategist at StockCharts.com. “The stock market is all about pricing in expectations for the future, and perceived threats to their business models could mean limited upside for this group.”

Today’s weakness in Big Tech weighed on all the blue-chip indices to varying extents. The Dow Jones Industrial Average declined 0.3% to 31,008, while the Nasdaq Composite took a bigger 1.3% hit to 13,036.

Other action in the stock market today: 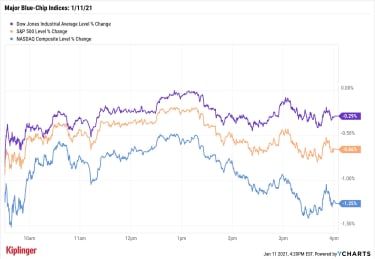 Keep Your Portfolio Balanced With Income

Whether Big Tech’s losses will stick remains to be seen, but Monday did serve as a quick reminder of growth’s double-edged sword. Many growth stocks, even the market’s largest, can have momentum turn against them in a flash, whether it’s on regulatory worries, a disruptive rival or some other outside shock.

That’s why, when you’re constructing a strategy to build wealth over time, it pays to also invest in companies that pay … dividends, that is.

While it can be difficult to find stocks that can deliver huge chunks of returns via those cash distributions, especially at the market’s current lofty levels, they do exist. You’ll see many of them among the ranks of Wall Street’s monthly dividend payers, whose distributions are much more frequent than the quarterly norm.

Among that group are real estate investment trusts (REITs) – a familiar sector, and one whose components are required to pay 90% of their taxable profits as dividends to shareholders.

You might be less familiar with another business structure with the same mandate: business development companies (BDCs), which provide financing to smaller businesses. These private equity-esque firms can struggle when economic conditions hamper Main Street, but they stand poised to reap the rewards of an American recovery while offering some of the best yields on Wall Street. Read on as we look at some of the best BDCs for the year ahead: a set of five stocks yielding between 7.7% and 10.6%.

Kyle Woodley was long AMZN and Bitcoin as of this writing.