You are here: Home / News Tech / Internet outage forces Iranians to resort to old ways – The Times of Israel

TEHRAN — Iranians struggled to adjust to life offline for almost a week and were forced to resort to old ways due to a near-total internet blackout imposed amid violent protests.

The demonstrations flared on November 15, hours after a shock decision announced at midnight to raise the price of gasoline by up to 200 percent in the sanctions-hit country.

The timing of the announcement was seen as a bid to forestall chaos, such as caused by motorists stocking up on fuel before the hike took effect.

The internet restrictions, for their part, apparently aimed to temper shows of dissent and anger over the move and stop footage of the unrest from being shared.

Brigadier General Salar Abnoosh, a deputy head of the Basij volunteer militia, said Friday that the internet outage had helped to “disrupt the complicated” plans by Iran’s enemies. 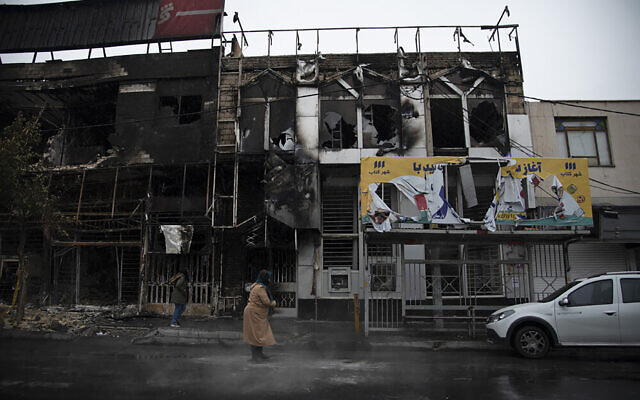 People walk past buildings which were burned during protests in the city of Karaj, west of the capital Tehran that followed a nation-wide raise in gasoline prices in, Iran, seen on November 18, 2019. (Masoume Aliakbar/ISNA via AP)

On Saturday — day seven of the internet restrictions and the start of the working week in Iran — people in Tehran were trying to overcome problems brought on by the outage.

Some said they had been forced to make long journeys to carry out simple transactions that they used to be able to do in a couple of clicks online.

“We have no other choice,” said a woman in her 30s who only gave her name as Asgari.

“What I could have done by using internet now I have to do by telephone or some other means,” she told AFP.

“I’ve taken today off from work to come into town to do something which I could’ve done by using the internet.”

Others said they were having difficulty reaching loved ones overseas.

“I wanted to call my children but I couldn’t,” said Taheri, a man in his 70s. “They were worried and had to go and get a card to call us. This is not right.”

For many in Iran, the lack of internet access was more than just a hindrance to social activity.

The country has a thriving online economy, with its own equivalents for apps like Airbnb, Amazon and Uber. 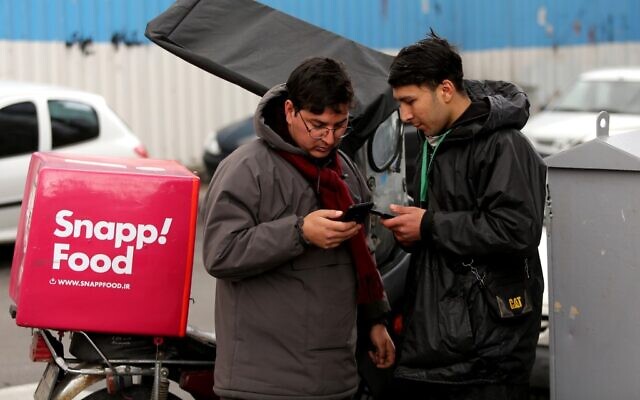 A bike-delivery food messenger stands next to another man as they both use smartphones along the side of a street in the Iranian capital Tehran on November 23, 2019. (Atta Kenare/AFP)

They have come through the outage largely unscathed as people can still access domestic applications on their phones.

However, smaller businesses that rely heavily on social media to stay in touch with their clients suffered during the outage.

Among them were travel agencies whose services were badly disrupted.

“An acute problem has been created for all travel agencies,” said Hormatollah Rafiei, head of the Travel Agents Guild Association.

“The sale of foreign tickets and reservations for foreign hotels reached zero and some travel agencies closed due to financial losses,” he said, quoted by ILNA news agency.

Connectivity in Iran “began to fluctuate on Friday evening [November 15] before a sequence of cuts that saw levels fall to a nadir of four percent” compared with normal levels, said Netblocks, a site that monitors global internet disruptions.

“Apart from fluctuations on Sunday, access to the outside world flatlined consistently until Thursday when limited connectivity appeared across most regions,” it said.

On Saturday, connectivity was back up, the monitor added.

The minister, Mohammad-Javad Azari Jahromi, said he was just another Iranian made to suffer the consequences of sanctions that the US reimposed after withdrawing from a 2015 nuclear deal. 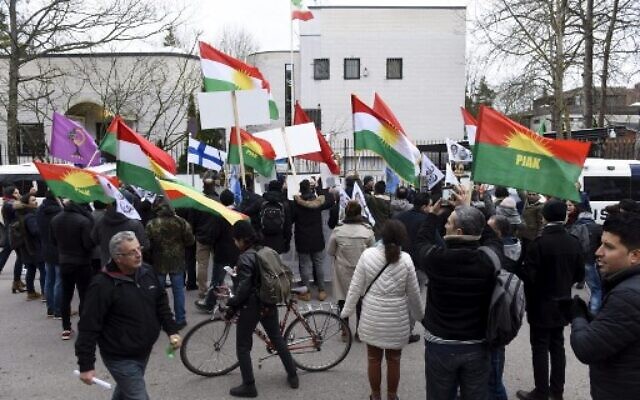 Demonstrators opposing the Iranian government’s policies protest in front of the the Embassy of Iran in Helsinki, Finland on November 21, 2019. ( Heikki Saukkomaa / Lehtikuva / AFP)

“I’m not the only member of club of sanctioned persons,” he tweeted.

“Before me, Iran ICT startups, Developers, Cancer patients and EB children were there,” he said, referring to epidermolysis bullosa (EB).

Iran says the US sanctions have hindered its access to drugs for EB, a skin condition that afflicts children, causing several deaths.

The government said it would unblock the internet only when it was sure it would not be abused.

Mina, a woman in her 50s, said she had little choice but to sit tight.

“My family lives abroad and I was always in touch with them but now I have no contact with them,” she told AFP.

“I need to get a phone card because it’s too expensive to call abroad [from a fixed line phone],” she added.

“What can we do? We are trying to stay patient.”

A message from the Editor of Times of Israel

The Times of Israel covers one of the most complicated, and contentious, parts of the world. Determined to keep readers fully informed and enable them to form and flesh out their own opinions, The Times of Israel has gradually established itself as the leading source of independent and fair-minded journalism on Israel, the region and the Jewish world.

We’ve achieved this by investing ever-greater resources in our journalism while keeping all of the content on our site free.