The AMD Radeon Pro Vega 16 and Vega 20, two new graphics configurations the 15-inch MacBook Pro will have starting from November, stand to offer considerable performance upgrades on the previous generation, including the use of compact HBM2 memory. 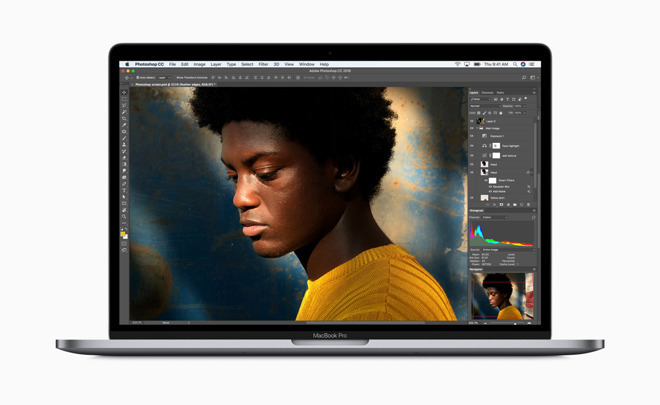 Produced on a 14-nanometer FinFET process, the Vega 16 and Vega 20 are claimed by Apple to be 60 percent faster than the Radeon Pro 560X GPUs currently provided to MacBook Pro customers as a high-end option. Just on this statistic alone, the upgrade will be highly useful for mobile creative professionals.

The Vega 16 and Vega 20 have what AMD describes as “Vega next-generation compute units,” with each having 16 and 20 compute units respectively. A feature called Rapid Packed Math will help make processing faster, accelerating workloads in realtime and cutting down the required resources to complete repetitive tasks.

The included support for second-generation high bandwidth memory (HBM2) also provides a few extra bonuses compared to the more conventional GDDR5 memory used in other graphics cards. As the name suggests, it offers considerably more memory bandwidth per chip compared to GDDR5, while at the same time consuming less power.

HBM2 also offers physical space savings by being located on the GPU package, which can make for a smaller overall footprint for a GPU, and in turn offering notebook vendors like Apple more space for other components.

While the new options will provide a considerable boost for graphical performance, they will not be the only way MacBook Pro owners can gain a processing advantage. During the event, Apple announced the Blackmagic eGPU Pro which will use Radeon RX Pro Vega 64 graphics, a considerably more powerful GPU than the discrete graphics options.

The choice to use the Vega 20 name for one of the two options is unusual, as it is believed by enthusiast PC users that the Vega 20 will be the first GPU from the company using a 7-nanometer process, a GPU that is anticipated to be released later this year. The desktop-class GPU is said to include between 16GB and 32GB of HBM2 and require between 150 Watts and 300 Watts to run, which can be generously described as undesirable for notebook usage.

It is possible that AMD could rebadge the supposed card ahead of its formal launch, so as to avoid confusion with the already publicly-named Vega 20 for the MacBook Pro.

Apple will start to sell new MacBook Pro models with Vega 16 and Vega 20 configurations from November 14, as custom orders from Apple directly and Apple Authorized Resellers. Pricing for the options has yet to be announced.