For years, we didn’t have hope that the Ford Ranger would return. The spread between smaller trucks and their more profitable full-size stablemates wasn’t big enough. Then, a shift happened – so slowly at first you didn’t notice it happening. There are compact trucks everywhere. The Toyota Tacoma, well, that never went away, but fancier variants proliferated. The second-generation Chevy Colorado grew up, and boy is it selling well. Even the Nissan Frontier, which has been on sale for thirteen model years, soldiers on. A once thinning field is almost back to full strength, and so the Ranger returns to a truck-crazy America it wouldn’t have recognized when it left.

Of course, the Ranger never really went away. It lived on elsewhere, sometimes based on a Mazda platform and rebadged as a Ford, and sometimes the other way around. This version dates back to 2011, developed by Ford of Australia. While it was undoubtedly rugged, tastes abroad are for softer-looking, less macho trucks – it wouldn’t have worked here.

After all, here the hard-edged, decidedly macho F-150 is the best-selling vehicle, and has been for 37 years. Transaction prices are skyrocketing thanks to the rise of the luxury-oriented and plush heavy-duty end of the market. Buyers seemingly can’t spend enough on fancy trucks. The 2019 Ranger is here to soak up some sales in the space the F-150 is vacating.

But don’t think of it as a three-quarters scale F-150. Ford took the international Ranger’s basic hardpoints – such as where the cab bolts to the frame, and so on – and kept those. The frame looks the same from 20 feet away, the Ranger chief engineer, Rick Bolt, tells me. But there’s completely different mix of regular and high-strength steel throughout, adapted to our needs and regulations. The car-like styling has been replaced with a chiseled, muscular, and, well, truck-like aesthetic. It doesn’t feel like an old product with a superficial freshening-up, either – it feels like a new truck that was intended for our market from the start. 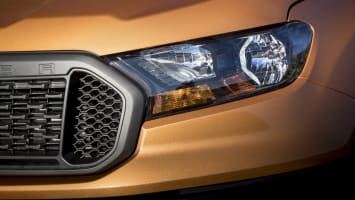 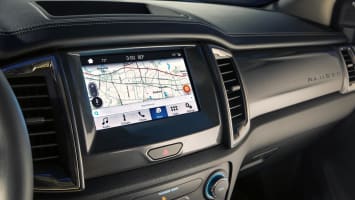 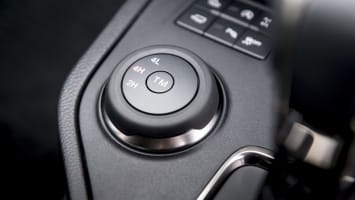 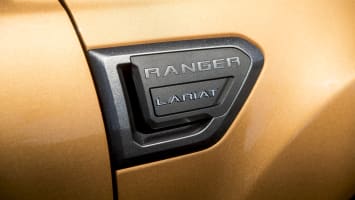 The Ranger was restyled inside and out, giving it a family resemblance to the massively popular F-150 without merely being a scaled-down clone. It’s compact without being crowded inside, and the crew cab models have enough room for four average sized adults to be comfortable for a reasonable amount of time. The bolt-upright rear seats in the extended cab models should only be used in emergencies, or maybe as a punishment. (They can be deleted, too, which’ll save you $240.) But the front seats are comfortable; We spent about 4 hours in them without getting fidgety.

More important than any of that is the engine and transmission. Rangers everywhere else are normally fitted with rugged but sluggish diesel engines. In America, Ford is almost all-in on its EcoBoost line of turbocharged gas engines, so it chose a modestly sized inline-four. It’s related to the unit used in the Mustang (and even more closely to that in the Focus RS) but retuned for truck duty. With 270 horsepower and 310 pound-feet of torque, it’s a much closer competitor to its V6 rivals than any of their non-turbo four-cylinders. Paired to a Ford-GM 10-speed automatic, it’s the only powertrain available.

It’s the defining characteristic of the truck – unique among its rivals, at least until Chevy transplants the 2.7-liter turbo from the Silverado into the Colorado – and a point of differentiation with the larger F-150. It helps it get class-leading fuel economy, and on paper it’s plenty powerful. But the truck segment is still a conservative one, and the little four-banger will be a stumbling block for some buyers concerned it may not reliably or effectively do the work of a larger engine with more cylinders. 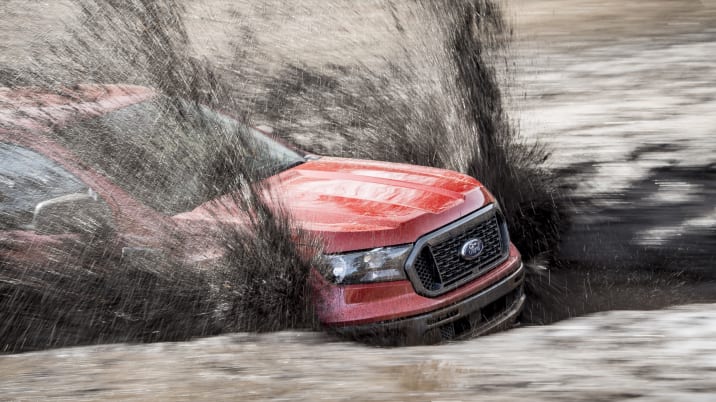 Those concerns are largely misplaced. The 2.3-liter is, simply put, better at deploying its available power. The Colorado’s 3.6-liter V6 doesn’t make its 275 lb-ft until 4,000 RPM; the Tacoma’s 3.5-liter 265 lb-ft don’t come until 4,600 RPM. The Ranger has considerably more torque, all of which is produced at just 3,000 RPM – and with a larger gear spread, it stays in its powerband longer. That makes a huge difference.

Plus, buyers are used to four-cylinder engines in smaller trucks – just not as a V6 replacement. Ford already faced a similar perception issue in the Mustang, which has begrudgingly earned its place in our hearts as a suitable pony car engine. In the Ranger, it needs to feel powerful, move the truck around swiftly, and not drink too much gas – check, check, and check. (Ford estimates its EPA fuel economy at 21 city, 26 highway for 4x2s and 20 city, 24 highway for 4x4s – edging out the competition by a hair.) It doesn’t sound terrible doing so, either, but just like in the Mustang the aural experience is a bit surreal – should this vehicle be making sport sedan noises? – and it’s thrashy when pinned.

And yet, when faced with 10 gears to choose from and the truck’s not-inconsiderable mass (4,145 -4,441 lbs), matting it doesn’t cause discombobulation. A little pause and then a downshift or three, and things progress smoothly. There’s little confusion and even less hunting. There are fleeting hints that Ford may have a little calibration work left to refine what is still a very new transmission. Creeping along from a stop, there’s a little judder here and there. Overall, it feels like it belongs in a truck – no small feat for a little engine. 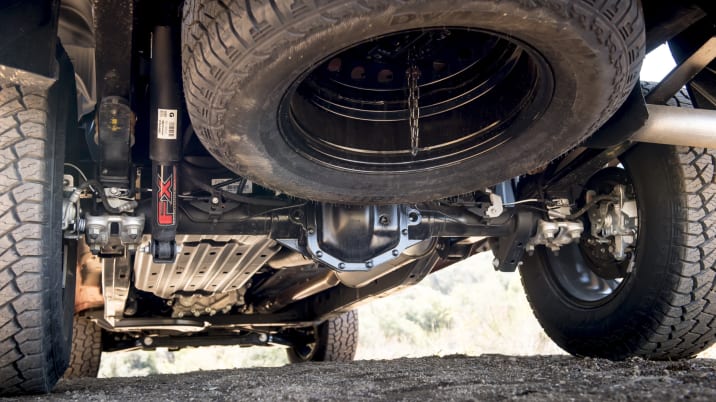 On- and off-road, the Ranger’s exceptionally precise and communicative electrically-assisted steering was delightful – it’s easy to point and place this truck, and it doesn’t require constant prodding to stay in its lane. The suspension contributes a lot to the Ranger’s poise on pavement and dirt, firm enough to prevent it being tippy and to hold up a payload without sagging miserably, but not being so firm as to bounce around. Much credit goes to the dampers, which are conventional monotube dampers, and very well-tuned. The rear axle is leaf-sprung, but instead of multiple semi-elliptical leaf springs it utilizes a main parabolic spring – lighter, to save unsprung weight, but shaped to provide an equivalent ride. I think these parabolic springs will find their way into more trucks.

After a long drive to a remote ranch, we spent some time off-pavement in an FX4. The dirt course was engineered not to challenge the Ranger too much, but did show off the truck’s electronic locking rear differential, off-road tuned suspension, and electronic helpers: Terrain Management Control and Trail Control. The Hankook Dynapro AT-M tires clawed up sandy slopes and sprayed our videographer with watery mud. It all looked great on camera, but it was more photo op than true test – we can’t wait for an unchaperoned go on tougher terrain. No, there won’t be a Ranger Raptor coming, either. The FX4 is the gnarliest Ranger for now.

We’re also eager to test the Ranger’s payload and towing capabilities – both better than the Tacoma, Colorado, or Frontier – out at a later date. As for what years of towing will do to the newfangled transmission, or how the little turbo motor will manage heat at close to its rated capacity on a long incline isn’t clear, and we won’t prognosticate. 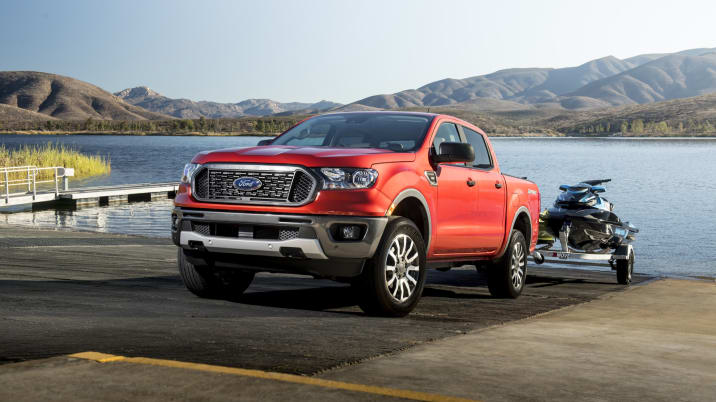 We can predict that the starting price of the Ranger might offset some of the skepticism. Despite expensive turbocharged engine, the cheapest Ranger starts at $25,395 – undercutting the competition’s similarly-powerful trucks, the Colorado WT V6 4×2 ($27,130), the Tacoma SR V6 4×2 ($29,425), and even the Frontier SV V6 4×2 ($26,665). The flipside is that there’s no lower-tier engine to drop the entry level price of the Ranger even further. You can get into a bare-bones Frontier S for $20,035, or a Colorado Base for $21,495. If a rock-bottom price is more appealing than class-leading economy and capabilities, then that’s the answer.

But the market tells us that, right now, buyers don’t want rock-bottom trucks. And that’s why Ford is smart to re-introduce the Ranger as a mid-tier truck right out of the box, with a powertrain that’s powerful, efficient, and slightly novel – all housed in a body that’s crisper inside and out than its arch-competitors, the Tacoma and Colorado. Its aggressive entry price, dimensions, and fuel economy help put enough distance between it and the F-150 that few buyers are going to feel torn.