You are here: Home / Learning English / English vocabulary for children about seasons and weather

English vocabulary for children about seasons and weather

Basically, 1 year in Vietnam is divided into 4 seasons including spring, summer, autumn and winter. So how are these seasons said in English?

Spring is one of the four commonly recognized seasons in temperate and subarctic regions, interspersed with winter and precedes summer. When it comes to spring, people often think of rebirth, renewal, rejuvenation, resurrection, and re-growth.

Summer is the hottest season of the year, with heavy rains; occurs sometime between spring and autumn. In summer, daylight is longest and days are longer than years.

Autumn is the transition period from summer to winter. In this season, most of the crops are harvested and the trees begin to lose their leaves. This is the same season where the daytime is shorter and colder. In temperate regions, rainfall is also gradually increasing in some areas.

Winter is the season with the shortest days and lowest temperatures of the year. In countries far from the equator, winter appears snowfall. In some places, winter is also known as the dry season.

In addition to the 4 seasons mentioned above, in the south of Vietnam, people divide the year into 2 seasons, including:

Each season will have different weather characteristics, so do you know how to talk about these types of weather in English?

We say sunny when the sky is clear, not cloudy and the sun is shining clearly.

There are a lot of clouds in the sky and it is usually quite overcast, with little sunlight.

“partly-cloudy” used when both sun and clouds exist in the sky.

It rains when there are drops of water falling from the clouds. 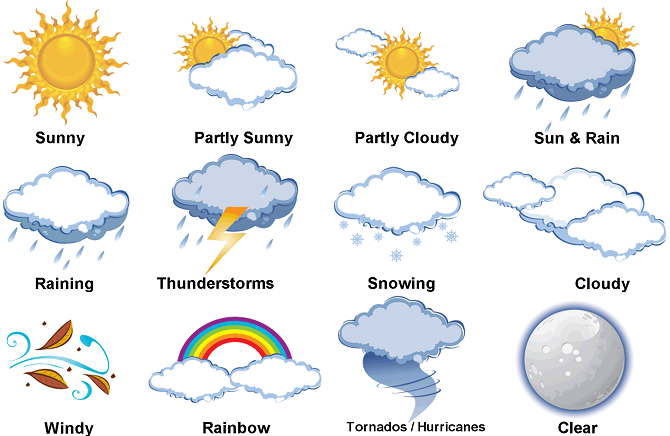 Light rain is a rain with a small amount of water, light. Sometimes it can also be “drizzle”.

Heavy rain is a rain with a large amount of water. It is similar to “rainfall”, “rainfall”, etc.

The word hail refers to rain that is partly water and partly solidified into ice.

Winds are large-scale moving air currents that can be either hot or cool depending on where it comes from.

Frost is a thin layer of ice that forms on the surface of objects such as grass, the ground, windows, etc. when the air is very cold.

Snow is water droplets that, before falling to the ground, have been cold enough to freeze into “ice”, but it is different from ordinary “ice, ice”, snow is much lighter.

A tornado is a powerful storm where very strong winds move around a circle around a point.

Hopefully, the above English words will help your baby have more vocabulary about seasons and weather.