The demand for the iPhone XS is being unappreciated by investors, analysts for J.P. Morgan suggest a few days before Apple issues its quarterly results, with the average selling price of iPhones anticipated to exceed earlier predictions due to the higher price of the larger model. 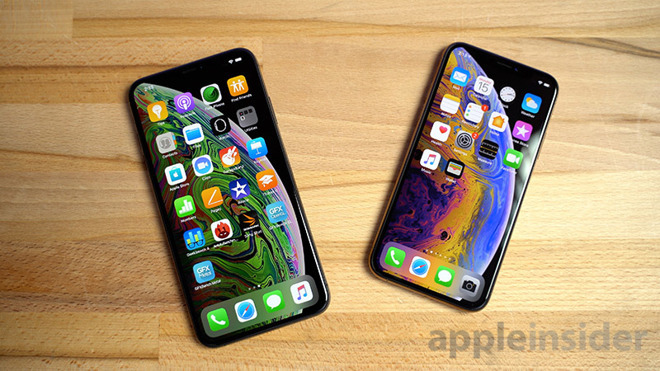 The pricing of the 2018 iPhone is thought to be a “primary source of upside relative to investor expectations,” a note received by AppleInsider advises, with the average iPhone ASP tipped to be at $801 for the fourth quarter 2018 results. This works out to be $5 above the highest iPhone ASP on record, which was $796.42 in the first quarter of 2018.

Going along with the general consensus on demand, it is expected by the analysts that the iPhone XS Max will outsell the iPhone XS, with the higher $1,099 price helping to push up the ASP. On October 22, Rosenblatt Securities suggested a similar situation would occur, with the iPhone XS Max driving the ASP up, while three days prior, Guggenheim posited a 24-percent year-on-year gain in ASP.

The forecast is for 46 million iPhone shipments in the quarter which may help drive overall revenue to $62.3 billion, slightly above the $60 billion to $62 billion guidance range, in part because of the better ASP. Gross margins of 38.2 percent are predicted, in the middle of the 38 percent to 38.5 percent guidance range.

One thing that increases the analysts’ confidence in the higher ASP is its tracking of a set of Apple suppliers who all derive at least 50 percent of their revenue from the company. Revenue growth for the suppliers reported in the September-end quarter apparently points to a strong increase in iPhone ASPs.

Another key area highlighted by the analysts is Apple’s Services unit, which is tipped to increase in revenue by 19 percent year-on-year to $10.1 billion for the quarter. The strong growth in its install base and higher service revenues per device, such as yearly Apple Music and cloud services growth of around 50 percent year-on-year, will help Services account for approximately 14 percent of total revenue in the full year 2018.

While not offering potential figures for the Apple Watch, J.P. Morgan suggests it will be a focus of the earnings call. “We believe investors will fully realize the acceleration in Apple Watch shipments” in the first quarter of 2019, the note states, adding the extra features like ECG testing likely to make the Series 4 version “a top grossing holiday gift item.”

Apple will be releasing its quarterly results on November 1, and AppleInsider will be covering the figures and commentary from Apple’s management as they are made.

J.P. Morgan also offers its expectations for tomorrow’s Apple special event, held in Brooklyn, New York. The firm anticipates product updates for the iPad range, as well as both Mac and MacBook lines. For the iPad or iPad Pro element, it is expected Face ID will be featured, “to demonstrate Apple’s commitment to driving competitive advantage through technology adoption on its products.”

The analysts continue to rate Apple as “Overweight,” and with a share price target of $272 by December 2019.

AppleInsider will be at the “There’s more in the making” event, where we expect new iPad Pros, and maybe even new Macs! Keep up with our coverage by downloading the AppleInsider app for iOS, and follow us on YouTube, Twitter @appleinsider and Facebook for live, late-breaking coverage. You can also check out our official Instagram account for exclusive photos.