Seattle, Washington – At the centre of the spread of the novel coronavirus in the United States is a nursing home in Washington state where several people have died after being diagnosed with COVID-19.

Four ambulances rushed to the Life Care Center in Kirkland, in the Seattle area, on Monday morning. As stretchers wheeled people from inside, nurses held up white sheets to block the view of several news crews standing on the street.

By the end of the day, the virus’ national tally of victims had jumped from two to six. The tally rose again on Tuesday, with Washington state reporting nine deaths. Seven were tied to the Life Care Center, including first death that was reported last week.

The virus is unlikely to be as deadly in the general population, but the nursing home in Washington state signals that it has been more widespread than previously thought.

Scientists warn that long-term care facilities are an unfortunate overlap for two conditions viruses thrive on: close contact with a limited number of people and vulnerability of patients.

“These are circumstances where a respiratory disease that spreads from person-to-person contact can spread rapidly,” infectious disease expert at Vanderbilt University William Schaffner told Al Jazeera.

“This nursing home was just unlucky,” Schaffner said. “I don’t think that nursing homes are categorically at increased risk at this time, but if a virus gets access to a nursing home, it will spread.” 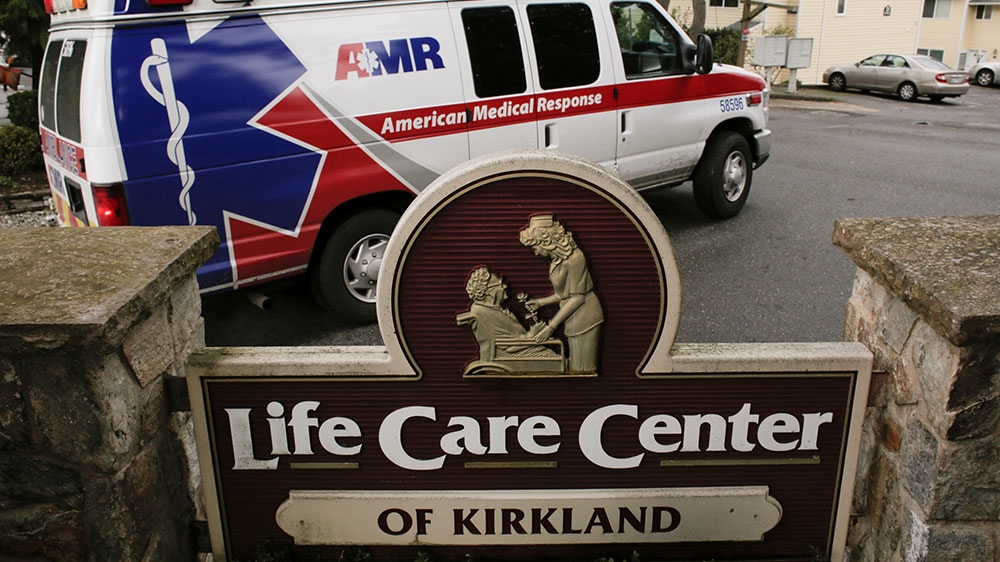 Medics and other healthcare workers transfer a patient on a stretcher to an ambulance at the Life Care Center of Kirkland, the long-term care facility linked to the two of three confirmed coronavirus cases in the state, in Kirkland [David Ryder/Reuters]

The centre has been trying to reserve an open phone line for worried relatives who may want to call in, and contact with staff members has been limited to official statements.

Long-term care facilities have been put on high alert and given new guidelines by the Center for Disease Control, the American Health Care Association, and AMDA – The Society for Post-Acute and Long-Term Care Medicine.

In general, these facilities know how to deal with a viral outbreak when it happens, because they prepare each year for the violent arrival of influenza viruses, said David Nace, the president-elect of AMDA.

Each long-term care facility should have a plan to manage an influenza outbreak, but the Life Care Center, for example, was investigated in 2019, when it had two influenza outbreaks, for not meeting hygienic or ventilation protocol.

In a statement on Monday, the facility’s director said residents and associates are being monitored closely and if they display an elevated temperature, cough and/or shortness of breath, they are put in isolation.

“We are also following infection control recommendations, including proper hand-washing techniques and wearing masks, gowns and gloves when caring for any symptomatic patients,” Ellie Basham said.

Nursing homes and assisted living centres concentrate enough people that they often become a signal to epidemiologists when other viruses may be in the community.

“Long-term care facilities become like canaries in a coal mine where the community may be circulating the virus,” Nace told Al Jazeera.

If influenza strikes the general population in the US, roughly 0.1 percent of patients will die. In a long-term care facility, however, the mortality rate has been shown to be anywhere from 5 percent to 55 percent. 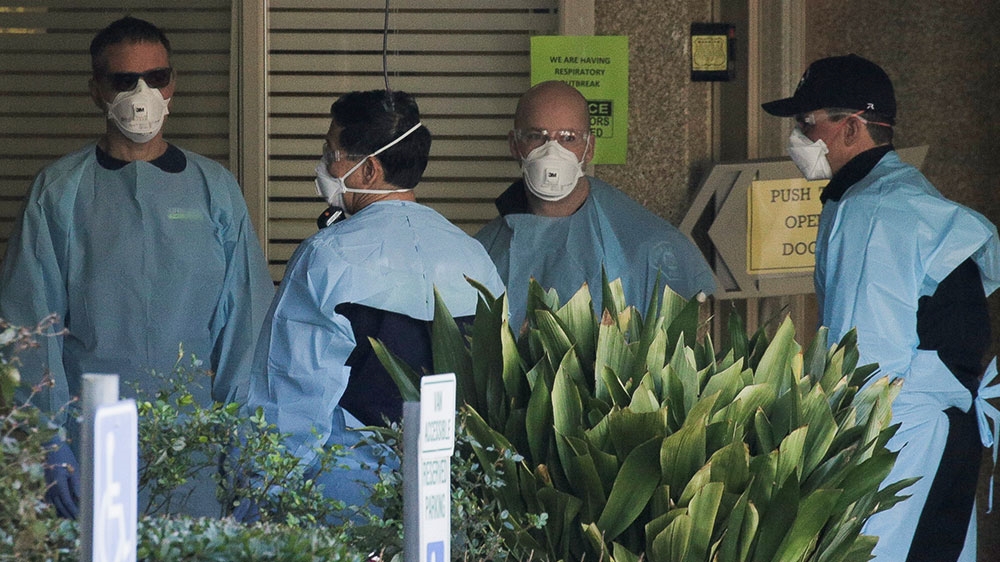 That makes this new coronavirus a much bigger threat to frail populations, especially if concentrated in a single building.

“Colleges and schools also stay in close contact and can be a cesspool for diseases,” said Nace.

Coronavirus is transmitted similarly to influenza viruses. Sharing fluids or coughing on others can exchange the virus that lives on the surface of water droplets.

But the new coronavirus is different in two major ways: the up to 14-day incubation period is much longer than influenza, and when COVID-19 is contracted, the body can experience more severe symptoms.

To protect against the virus’ spread in such close quarters, nursing home guidelines advise much the same as they would with influenza: clean surfaces and stop unnecessary interactions.

Only the facility in the Seattle area is known to have sealed itself off so far. A few schools nearby told students to stay home, and two colleges closed for deep cleaning. Twenty-nine firefighters who responded to the Life Care Center’s emergency remain in quarantine.

The threat to nursing homes has made some citizens ask whether they should take their family members home as soon as possible. David Gifford, chief medical officer of the AHCA, says that is not a recommendation he would support.

“Moving someone who needs care can be very destructive and problematic,” Gifford told reporters on a call, noting that if COVID-19 is in the community, then it could be more dangerous.

“Then, if COVID-19 is in the facility, then, it could be spreading to others outside,” he said.

So far, little is known about the novel coronavirus, particularly regarding its spread, incubation period, and what its disease COVID-19 does to humans.

“We’ll get an even better idea when we can test more widely,” said Schaffner of Vanderbilt. “Testing has been notably restricted so far in the US.”

The threat to nursing homes is one that highlights the dangers of living in close quarters, but nursing homes are not the only ones at risk. Schools, colleges, prisons and homeless shelters can also be hotbeds for the spread.

“There has been a long history of outbreaks in closed settings,” epidemiologist and professor of public health and human rights at Johns Hopkins University Chris Beyrer told Al Jazeera.

In these settings, patients can be more vulnerable to viruses than the general population, because of low ventilation and poor nutrition often coupled with stress. The Diamond Princess cruise ships kept people in close quarters, and workers on cruise ships often live in places where infectious diseases can flourish. 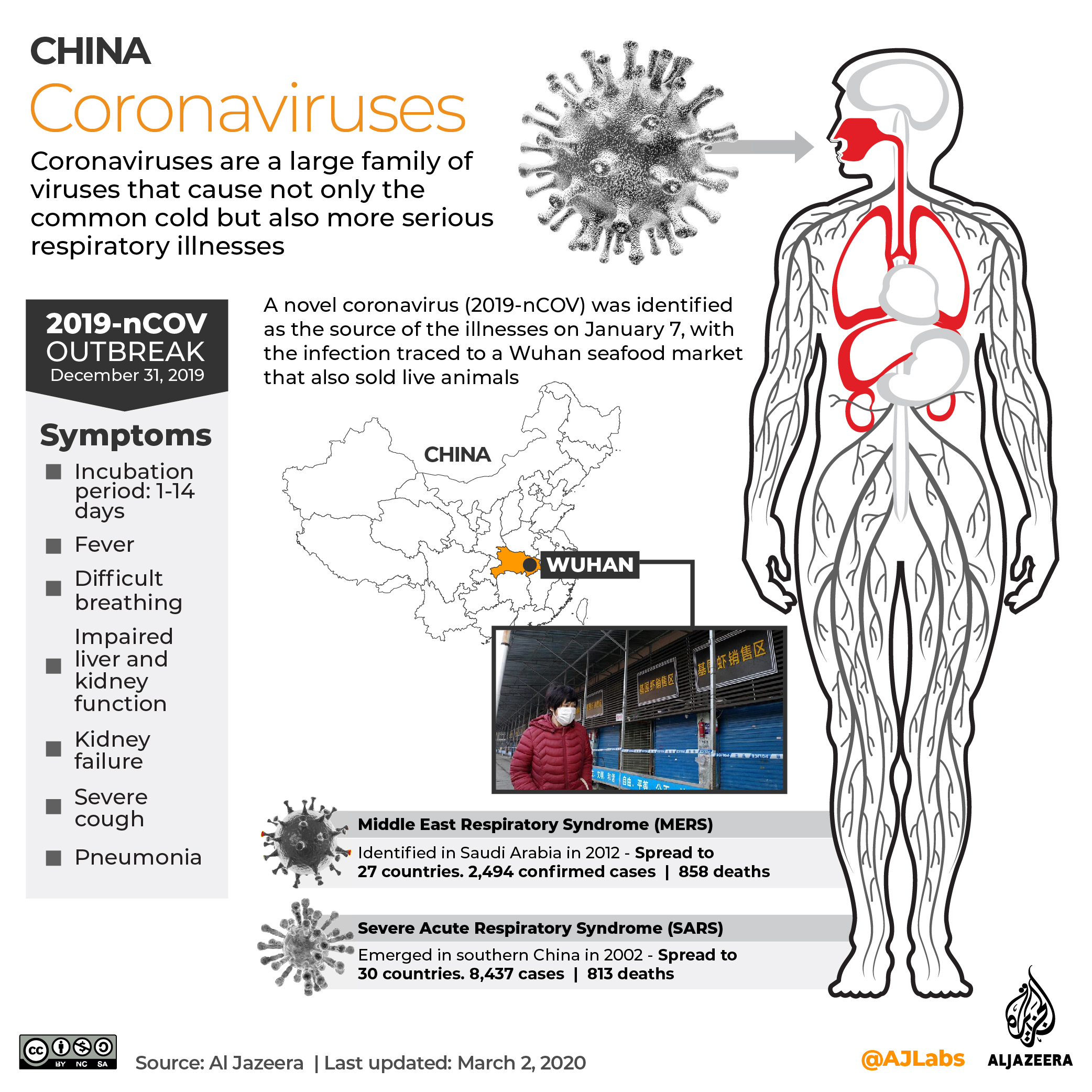 In the US, tens of thousands of immigrants are kept in detention centres. In a high-profile case last year, 16-year-old Guatemalan Carlos Gregorio Hernandez Vasquez was diagnosed with the flu and a 103-degree fever. He died overnight in the detention centre.

“If he had coronavirus, the person who saw him and everyone around him would be extremely vulnerable,” Beyrer said.

“We’re in the midst of a coronavirus crisis and an immigration crisis,” he added.