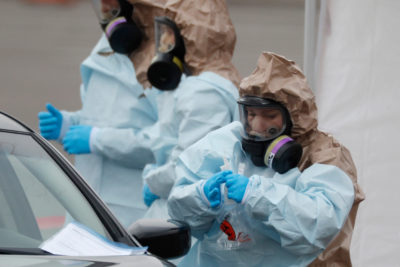 ProPublica is a nonprofit newsroom that investigates abuses of power. Sign up to receive our biggest stories as soon as they’re published.

On Tuesday night — over a day after several Bay Area counties issued shelter-in-place orders barring most people from leaving their homes — the San Francisco immigration court sent an email to staff: Hearings were being postponed nationwide for most immigrants, so the court would be closed starting Wednesday. (The text of the email was provided to ProPublica.)

On Wednesday, however, employees were directed to get onto a conference call, according to two participants. There they were told the Tuesday night email was wrong. The court wasn’t closed. They would have to come into the office — or use their vacation time to stay home. When staff asked about the shelter-in-place orders, the response was that the Department of Justice, which runs immigration courts, took the position that those were local laws and didn’t apply to federal employees.

The Trump administration has reduced immigration court operations in the past week, by postponing hearings for non-detained immigrants and closing a handful of courts to the public. Those actions came after the unions representing immigration prosecutors and judges issued a rare public call for courts to close.

Help Us Report on Coronavirus

The reduced court operations came after weeks of employees raising concerns privately and, they say, receiving few and unhelpful answers. And because the closures are determined solely by whether a court is hearing cases of detained immigrants, rather than by the level of health peril, employees still feel they’re putting their health at risk every time they come into the office as instructed.

That’s the picture that emerges from interviews with 10 federal employees who work at immigration courts across the country. Most spoke on the condition of anonymity. Many said they had raised concerns internally about their exposure to COVID-19 to their managers or hadn’t been informed of potential exposures.

“When I signed up for this job, I thought it might be morally compromising at times,” one immigration court employee told ProPublica, “but I never thought it would be compromising of my health and safety.”

The Executive Office for Immigration Review, the DOJ agency that oversees immigration courts, told ProPublica that agency headquarters was responsible for deciding when courts closed, but it did not confirm or deny specifics of the employees’ allegations, saying, “We do not comment on internal communications or internal personnel operations.”

In Denver, one prosecutor interviewed by ProPublica was alarmed by a judge’s frequent coughs during a hearing last Friday. “Don’t mind my coughing,” the judge said, according to the prosecutor. “I don’t think it’s coronavirus.” The following Tuesday, the prosecutor noticed that the judge was out for the rest of the week and emailed a court staffer in concern: Was it the coronavirus? Should she be taking precautions? The staffer’s reply: For privacy reasons, the prosecutor’s questions couldn’t be answered.

Get Our Top Investigations

Only after news broke to the public on Tuesday night that a judge at the Denver immigration court had been diagnosed with COVID-19 (the disease caused by the new coronavirus) did court officials follow up with the prosecutor and confirm her suspicions. Other attorneys the judge had been in close contact with were notified the next day. The court remained open through Thursday, when the entire building it was housed in was shut down for deep cleaning by the General Services Administration. (It’s currently set to reopen Monday.)

In New York, legal aid groups sent a letter to immigration court officials saying that two of their attorneys had symptoms of COVID-19 and a third had been exposed to someone who’d tested positive. All three attorneys had appeared in court the past week, and all had hearings scheduled the following day. The courts didn’t say anything to their employees about the letter, according to multiple sources.

Since taking office, the Trump administration has pressured the immigration courts to process as many immigrants as quickly as possible — pressuring judges to hear more cases and complete them within a year, and making it harder for immigrants or attorneys to postpone hearings. Now, they face a public health crisis that requires everyone to reduce person-to-person contact.

Immigration court workers have two concerns. The first is that the courts are often crowded and require close contact with members of the public. The second is that, like most employees of any type, especially those who take public transit, they are exposed every time they leave their homes to work.

Employees remain concerned about their exposure over the past few weeks, while courts were running as usual. Employees in New York and California — the states hardest hit by the pandemic to date — told ProPublica that their requests for “deep cleaning” were rejected by managers, and that they were bringing their own Clorox wipes and disinfectant spray to the office.

Most immigration court business happens in person. Even trying to postpone an immigration hearing (for example, due to illness) requires an attorney to file a paper form with a clerk. And if an immigrant doesn’t show up for a hearing, they’re at risk of getting ordered deported in absentia. In at least one New York court, according to two people who work there, the chief judge told employees Monday to issue absentia deportation orders if immigrants weren’t showing up, even if the coronavirus was the suspected cause. 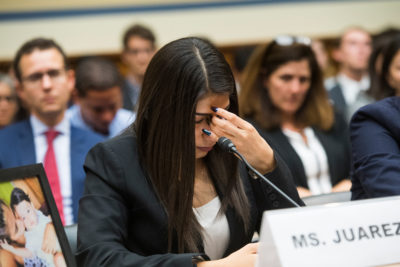 Policies the Trump administration introduced before the COVID-19 pandemic put considerable pressure on judges and prosecutors not to allow immigrants to postpone their hearings. Judges face a “performance standard” of completing 80% of their cases within a year — a standard over 90% of judges don’t meet, according to the National Association of Immigration Judges. But the more than 150 judges who have been hired in the past two years are still in their probationary period, where they could be fired for failing to meet performance standards.

While many judges have been lenient in granting coronavirus-related postponements, others have not. Last week, according to one California immigration court employee, a judge took a break from a hearing to tell colleagues that the immigrant’s attorney claimed to be sick, but because he wasn’t coughing, the hearing would move forward.

One email sent by the chief prosecutor at the Miami court Tuesday, read to ProPublica, told prosecutors that if an immigrant or her attorney claimed to be sick, any postponement should be counted against the immigrant (preventing them from requesting another postponement). If the immigrant didn’t want to postpone, and the judge wasn’t willing to hold the hearing by phone, the prosecutor was instructed to contact her manager — who would assess the claim of illness himself before deciding what to do. (A call to the chief prosecutor in Miami was not immediately returned.)

Most communication, though, has been oral. In at least two courts, chief judges were asked to put policies in writing and declined.

Employees have been in the dark about who, exactly, is making the decisions about which courts are open and when employees are allowed to work from home or take leave to stay home. “The word is that it’s out of their hands. Everything is out of everybody’s hands,” Fanny Behar-Ostrow, president of the union representing immigration prosecutors, told ProPublica Wednesday. “I don’t know who’s making the calls, but they’re wrong.”

An email obtained by the Miami Herald, written by the assistant chief immigration judge in charge of the Miami immigration court on Wednesday, said that closure decisions were ultimately being made by “the White House” — something that employees at other courts also said their managers had suggested. But chief judges gave conflicting explanations about which decisions were subject to White House approval; one chief judge told employees that the White House had to be involved in decisions about remote work, while other chief judges made those decisions themselves.

It’s not clear who at the White House is involved or how. Immigration officials told the Herald that the ultimate decision was made by the Office of Management and Budget. However, according to the employees ProPublica spoke to, some immigration court officials used “White House” to refer to policies set by the Office of Personnel Management. The assistant chief immigration judge (the judge in charge of a given immigration court location) for one California court told employees on March 12 that they’d had a phone call with staff for Vice President Mike Pence, who’s running the official coronavirus task force.

But to many employees, the specter of “White House” involvement raised concerns that the administration’s immigration policy priorities were getting in the way of its public health obligations.

The Department of Justice and White House did not respond to a request for comment.

Judge Amiena Khan, speaking as the executive vice president of the National Association of Immigration Judges, told ProPublica on Wednesday that she was “pleased to see that the agency is taking the correct steps in the right direction.” But other employees, like the ones in San Francisco, retain acute concerns that simply showing up continues to put them at risk. 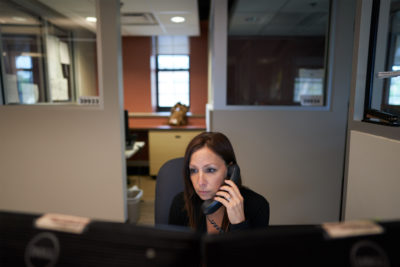 Employees have been told that courts are closing in full only if they exclusively hear “non-detained” cases — meaning all their hearings have been postponed for the next few weeks. At courts that hear cases of both detained and non-detained immigrants, all employees are expected to continue to work, even in the areas hardest hit by the pandemic.

Two employees noted to ProPublica that they had been deemed “nonessential” employees during the 2019 government shutdown, when their pay was at stake, but were now being treated as if they were essential and told to put their health at risk. “The government needs to decide,” one said. “Are we essential, or are we not?”

Some employees have been told they can take “annual leave” (vacation time) if they wish to stay home. But most junior attorneys at the DOJ, and many immigration prosecutors, don’t have much accumulated vacation time.

Many immigration judges have been staying home, either because of fear of contagion or child care needs. When a judge is absent, their docket is assigned to another judge. This week, that docket shuffling has gotten in the way of the DOJ’s efforts to wind down operations for “non-detained” cases. At one court that hears both types of cases, according to two employees who work there, none of the judges scheduled to hear detainees’ cases showed up on Wednesday — leading the rest of the judges, who were supposed to be shutting down their operations, to have to hear cases instead.

In theory, employees should be able to work remotely. But the crisis has exposed a nationwide laptop shortage at the Executive Office for Immigration Review. At some courts that have fully closed, employees have been told to wait at home and laptops will be mailed to them.

Where there aren’t enough laptops to go around, who gets to work from home is determined by seniority, not by health needs, according to several employees. Some courts have redistributed laptops from junior employees to senior ones.

At the Los Angeles court, some employees were given permission to work from home Monday and Tuesday. The court officially closed to the public Tuesday night. On Wednesday, according to one worker, employees were suddenly instructed to come into the office — where they were told to continue working, at their desks, until someone came by to take their laptops away so they could be given to immigration judges.

Tell Us More About Coronavirus