Montreal, Canada – The novel coronavirus has dominated news headlines for months, with dozens of countries around the world now forced to respond to cases within their borders and craft a plan to deal with the outbreak.

In North America, the United States‘s preparedness has been a matter of concern, and experts have questioned whether delays in testing would make it more difficult to contain COVID-19, the disease associated with the virus.

Areas on the north and south US borders present a specific challenge, public health officials say, as millions of people cross between Canada and Mexico and the US every week – and cooperation between those countries will be key to any response across the continent.

“You can’t build a wall high enough to keep this out,” said Alison Thomson, associate professor at the University of Toronto who specialises in public health ethics. “Borders are political barriers, but they are not respected by a virus.”

So far, the extent of communications between Canada, the United States and Mexico around the coronavirus outbreak is unclear, as is the plan of action – though officials in each country said they have systems in place and are speaking to their partners regularly.

Social cohesion and understanding that people and countries are in this together will be critical to how successful neighbouring countries are in containing the outbreak and maintaining trust between governments is critical, Thomson told Al Jazeera.

“We need to remember that solidarity and public trust and equitable access to healthcare are all going to be predictive of how well we come out the other side of this,” she said, adding that isolationist policies like those championed by US President Donald Trump are not effective in a public health emergency.

“This is a reminder,” Thomson said, that “we can’t contain these things without global cooperation.”

Last week, Seattle’s public health officer described the coronavirus outbreak there as “a very fluid” and “fast-moving” situation – but assured the public that healthcare workers were responding “aggressively” as the death toll climbed.

On Tuesday, Washington Governor Jay Inslee said the state was preparing for many additional cases.

At least 22 people have died amid 160 confirmed cases in the Seattle area alone, officials said on Tuesday, and the chance of exposure is increasing, with healthcare workers among those most at risk of contracting COVID-19.

Inslee said state officials were considering “real action”, including mandatory measures, to try to slow the spread of the virus. It was unclear what these measures may include, but Inslee told reporters he “would not be shocked if we have some news on that in the next few days”. 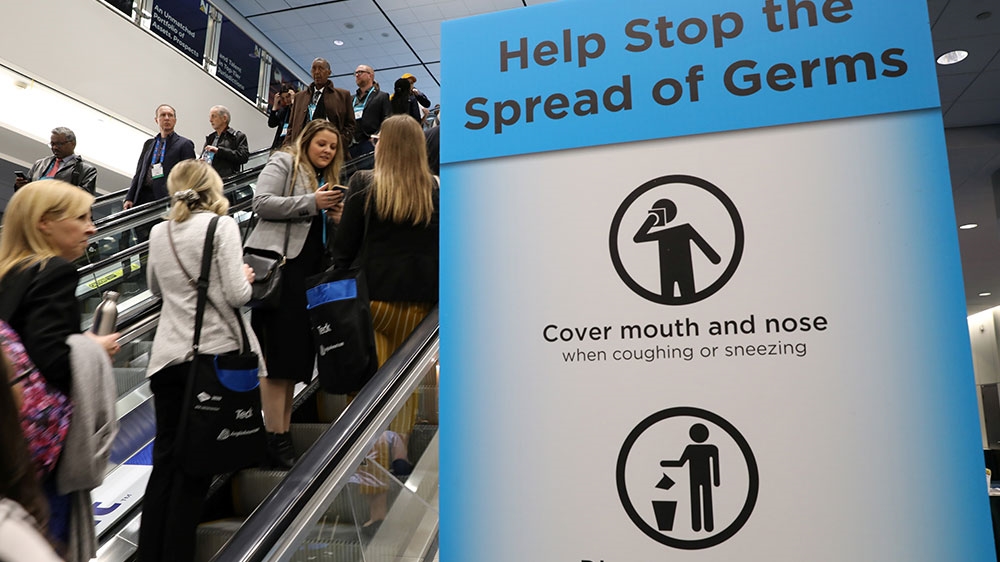 Visitors pass a sign warning about the spread of germs, after another case of the COVID-19 disease caused by the newly identified coronavirus was confirmed in the city, at the Prospectors and Developers Association of Canada annual conference in Toronto, Ontario, Canada [File: Chris Helgren/Reuters]

About 160km (100 miles) north of Seattle, on the Canadian side of the US border, public health officials have watched the situation closely – and questions have been raised about whether Ottawa should implement stricter entry regulations for people travelling from the US.

Late last week, health officials in Canada’s westernmost province, British Columbia (BC), reported the first “community case” of the coronavirus – a case that does not appear to be travel-related, and for which health officials cannot pinpoint the source.

“We need to find out the source of her infection,” BC Health Officer Dr Bonnie Henry told reporters.

Only a few hours earlier, a BC Ministry of Health spokeswoman acknowledged the risks, and the challenge of containing the coronavirus across the 8,891-km (5,525-mile) US-Canada border. “Diseases know no boundaries,” Paula Smith told Al Jazeera in an email.

BC has a working relationship with officials in the US Pacific Northwest, she said, pointing to an agreement known as the Pacific Northwest Border Health Alliance, an information-sharing and monitoring network that includes five US states and three provinces and one territory in Canada.

Smith said BC and Washington state specifically have collaborated in the past on investigations into cases of the measles, among other outbreaks that affected both places.

On the current coronavirus response, “[BC] health officials discussed exchanging information with Washington state and yes, if they needed support with lab testing, but they indicated they were ramping up their capacity for lab tests and did not need any assistance at this time”, she said.

A US Department of Homeland Security official said last week that the US had turned away hundreds of people at its land borders, including more than 100 Canadians who were denied entry on the northern border. “Some people may find it ironic, but the largest excluded group are Canadians, and it is Canadians who have travelled to China in the previous two weeks,” said Ken Cuccinelli, the acting director of the US Citizenship and Immigration Services.

As of March 10, Canada’s public health agency said 79 coronavirus cases had been confirmed across the country, the majority in BC and Ontario.

While public health officials are stressing cooperation, the coronavirus outbreak also has fuelled xenophobia – especially against people of Chinese background – and racist, anti-immigrant views, especially as it relates to people moving across borders.

In late February, Donald Trump said his administration was looking “very strongly” at the possibility of closing the country’s southern border with Mexico, where the US president has already promised to build a wall to keep out asylum seekers. Trump reversed his position only a few days later, however, telling reporters that he was “not looking at that at all now”.

On Tuesday, Trump was slammed online for apparently suggesting on Twitter that a wall was needed “more than ever!” to help stop the coronavirus.

Dr Carlos Del Rio, professor of medicine and global health at Emory University, warned against closing the border, which he said would have major repercussions not only on individuals who go back and forth between Mexico and the US daily, but would also disrupt trade and do damage to the economy.

It would also “be of no [public health] benefit to control this epidemic”, he said. 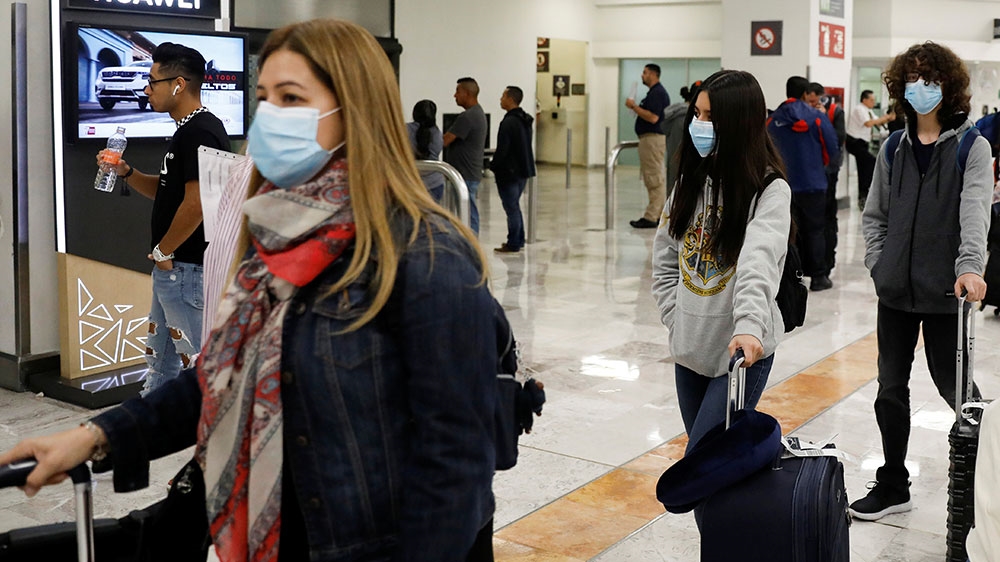 “Does it make sense? No,” Del Rio told Al Jazeera. “I think it would be very counterproductive and I think it would be of zero benefit and of much, much disruption to the people living at the border … Borders between nations should not impede collaboration of public health.”

Fernando Gonzalez is the lead epidemiologist at the Department of Public Health in El Paso, Texas, a city just north of the US-Mexico border that he said is characterised by the near-constant movement of people and goods.

El Paso and Ciudad Juarez, Mexico, sit on opposite sides of the Rio Grande. Deeper into the US, the city of Las Cruces, New Mexico, is home to about 100,000 residents only 74km (46 miles) north of El Paso. In that “highly dynamic” situation, constant communication is “the way we work”, Gonzalez said.

Borders between nations should not impede collaboration of public health.

Public health officials in El Paso, Las Cruces and Juarez have been in contact at least twice daily, exchanging information and strategies to respond to the COVID-19 outbreak, he explained, and El Paso has the capacity to test for the coronavirus locally. Mexico has a total of seven confirmed cases of COVID-19, according to the World Health Organization.

Since the H1N1 swine flu pandemic in 2009, Gonzalez said that El Paso has had a plan in place to respond to major outbreaks – from outlining emergency response measures, to monitoring potential cases and educating the public about best practices.

He added that the healthcare system is “robust and solid” in Mexico, as well, and his relationship with his counterparts across the border is strong. “It’s good to have those neighbours; they know how to do primary healthcare … We are prepared.”

Dr Gerardo Chowell, professor and chair of the Department of Population Health Sciences at Georgia State University, said the swine flu outbreak over a decade ago did set an important precedent for collaboration between the US and Mexican authorities.

That experience would likely be informing today’s response to the coronavirus, Chowell said, though it is unclear what the exact plan is in US-Mexico border areas.

He stressed that having a similar level of resources allocated to public health in both countries is critical, as is taking a coordinated approach. “If you only do [something] on one side of the border, and you don’t do it on the other side, you don’t have a consistent intervention,” Chowell told Al Jazeera.

“It may be problematic, and then the chain of transmission may succeed in [getting] out of control.”

He said countries should also be proactive and make sure that they have a plan ready before they need one. “The mentality is that the virus will arrive because it has to arrive, and it will spread because it’s highly transmissible, so what can we do? It’s going to come anyway. I don’t think that’s the right mentality,” Chowell said.

“The [World Health Organization] is calling countries to work hard to stop this transmission and that includes early detection, contact tracing … Don’t wait until you have a crisis.”