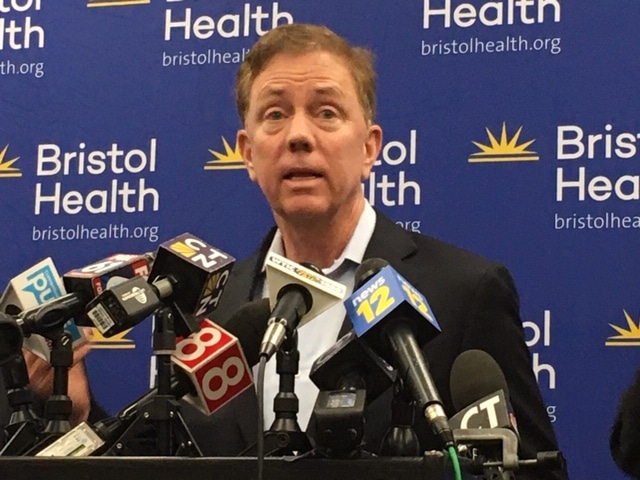 The social, economic and public-health challenges raised by the COVID-19 coronavirus loomed larger Monday as a second case was confirmed and Gov. Ned Lamont outlined measures Connecticut is taking to contain the virus and urged employers and residents to avoid large gatherings to limit exposure.

In a busy day of press conferences and briefings, Lamont announced a freeze on travel by state employees, a limited step that exceeds the voluntary precautions recommended by federal authorities. He is also discouraging — not prohibiting — gatherings of more than 100 people, but he is not joining New York in declaring a public health emergency.

“Everything we’ve laid out today we can do without a state of emergency,” Lamont said at a press conference at Bristol Hospital, one of the hospitals constructed a century ago in response to the Spanish flu pandemic of 1918. He added, “We have not ruled out anything going forward.”

Under state law, the declaration of a public-health emergency would allow Lamont to direct the commissioner of public health to order quarantines and vaccinations, but no COVID-19 vaccine exists, and none is expected to be available until next year at the earliest. A separate civil-preparedness law grants broader powers. Any emergency declaration would be reviewable by legislative leaders.

“What we’re trying to do is give people a consistent message: Be careful, be careful. Use obvious prudence, and we’re going to get through this in the near term, staying together as a state,” Lamont said.

Legislative leaders canceled meetings for Thursday and Friday to allow a deep cleaning of the State Capitol and Legislative Office Building. And they said the legislature is ready to act on emergency appropriations, if needed, and are considering legislation to prevent price-gouging during the pandemic.

New Haven took the governor’s advice and indefinitely postponed its St. Patrick’s Day parade, but the cautions against large public events are advisory and the state employee travel ban is not total. It does not apply to college coaches, and any decision about limiting the travel of sports teams would be left to the University of Connecticut and Board of Regents for Higher Education.

Lamont said state university officials may caution students against traveling for spring break, though the federal travel warnings so far focus on China, Italy, Iran and other nations with significant outbreaks.

The second confirmed case involving a state resident in Connecticut was a patient in the Bridgeport area, and officials warned that more cases are likely as the virus inevitably spreads and testing accelerates. As of 6 p.m. Monday, the state has tested 56 individuals, with 54 negative results and two positive.

The state’s capacity to detect COVID-19 doubled over the weekend with the receipt of a second test kit from the Centers for Disease Control and Prevention. Each kit allows the testing of 600 samples, with a recommendation of two test samples from anyone suspected to have the virus. Private labs are also now testing, with LabCorp taking samples and Quest Diagnostics following soon.

Bristol Hospital and Greenwich Hospital are establishing procedures that will allow patients to be swabbed for testing in trailers outside the hospitals, limiting exposure to a virus that public health officials say inevitably will spread. Officials said, however, that patients should not go to either hospital for a test unless directed by the physician. 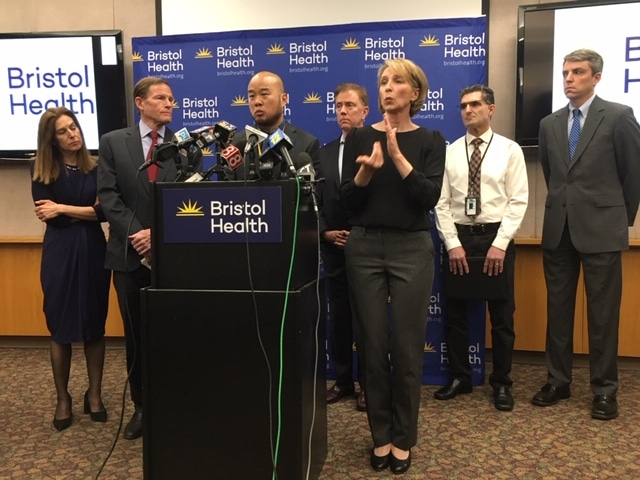 Dr. Andrew Lim, a physician at Bristol Hospital, said initial estimates of the mortality rates from COVID-19 appear to have erred on the high side, with newer data pointing to a death rate consistent with the flu. The elderly and persons compromised by respiratory conditions and are other illnesses are most vulnerable.

As of Sunday, there were 19 reported coronavirus deaths in the U.S., with 18 in Washington State and one in California.

Most people who contract COVID-19 will require no treatment other than rest and hydration, Lim said.

In Connecticut, a Wilton man who recently returned from California tested positive on Sunday, and public-health officials are tracing his contacts while he is being treated at Danbury Hospital. A doctor and nurse who live in New York but work in hospitals also have the virus. The doctor has made rounds at Bridgeport Hospital. The nurse works at Danbury and Norwalk hospitals.

Lamont and administration officials held two press conferences Monday, the first at Bristol Hospital and a second at the State Capitol, where he briefed legislative leaders.

The state hopes to avoid schools closings, which would have far-reaching consequences on families, civic life and the economy. There is no automatic trigger for closing schools, should students or teachers be diagnosed, said Josh Geballe, who is coordinating an inter-agency response as the state’s chief operating officer.

“There are kind of an infinite number of possible scenarios that could occur in school. But really closing schools becomes a very last resort, given how disruptive that is in so many dimensions and the other risks that can cause for the children, for the families, parents that have to stay home — some of those parents may be health care workers that then get pulled out of the hospitals. So these are the things we want to do as a last resort.”

“What we are going to be talking about with them tonight are the more discretionary school-related topics, things like school plays, things like sporting events,” Geballe said. “Starting to consider options — plays to an empty house, stream them on local access television. But getting large groups of people together at this point, packed together in tight quarters, is really not the right path forward at this stage.”

Whatever the eventual reach of the virus, officials already are exploring the financial ramifications to the state, the health care system and hourly workers whose hours could be curtailed during an economic slow down or are unable to afford a 14-day quarantine if they are exposed to the virus.

“We’re as ready as we can be,” Lamont said of the state’s finances. “We have a bigger rainy day fund per capita than any other state in the country. A lot of people had their eye on that fund. That’s going to help us weather what could be an economic storm.”

Geballe said the Department of Social Service and Department of Labor are looking at short-term unemployment and social welfare issues.

U.S. Sen. Richard Blumenthal, who joined the governor in Bristol, said he was heartened by the bipartisan support for passage of $8.3 billion in federal funding to help underwrite COVID-19 expenses for hospitals and state and local public-health agencies. But Congress still needs to address the impact on the economy.

“We are facing a threatened economic whirlwind,” Blumenthal said.

The governor and his administration generally sidestepped the coronavirus politics arising from the Trump administration’s mixed signals on the pandemic. President Donald J. Trump initially suggested the pandemic was less a public health threat than an opportunity for Democrats and the media to embarrass him in an election year.

The Trump administration has faced criticism for its slowness in providing COVID-19 test kits and its attempts to cut the budget of the CDC.

“I had a call with Vice President Mike Pence and his team to try and better coordinate what we’re doing at the federal level,” Lamont said. “They had some catching up to do, and they’re catching up. They got a million test kits out a little late, but they got them out. We got another 600 tests, so that was a big help. We’re ready to go for now. And they’re going to have another 4 million, they claim, by the end of this week.

“So they’ll be able to do more aggressive testing over time. We’re comparing notes again with other governors in terms of how they’re handling a lot of these same issues that we’re dealing with here, so we at least know what the protocols are going forward.”

Blumenthal complimented Lamont for speaking “clearly and candidly” about the virus.

“I wish the same could be said of our president. Deception and denial are not a strategy,” Blumenthal said. “What we’ve seen at the federal level is too much bungling and low-balling.”

On a day when Dow fell more than 2,000 points, Trump promised steps to tackle the economic impact of coronavirus, saying his administration would offer more details Tuesday.

Trump left the White House press room without answering whether he has been tested for coronavirus.

Both Trump and Pence attended CPAC 2020, a conservative political action conference. An unidentified attendee has been diagnosed with coronavirus, and two member of Congress have self-quarantined. Pence said he has not been tested and promised to find out if the president has been.

Ana Radelat contributed to this story from Washington.