Uniform motion is motion in which velocity does not change with time.

Irregular motion is motion in which the velocity varies with time.

a) Calculate the average speed of the irregular motion

b) Method of solving the problem by graph 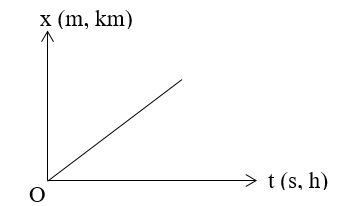 – The graph is a straight line that can pass through the origin O or not, depending on the way we choose the datum and the time.

– Graph each movement. Based on the intersection of the graphs to find the time and place where the movements meet.

2.1. Form 1: Determine the average speed of the object

A car goes up a hill with a speed of 16 km/h, when it comes back down the same slope, the car moves twice as fast as it does up the hill. What is the average speed of the car on both the uphill and downhill segments?

Let s be the length of the ramp

The average speed of the car in both segments is:

tfirst, t2 are the downwind and upwind time, respectively.

Verse 4: A motorboat is moving uniformly on the river. The speed of the boat when downstream is 20 km/h and when upstream is 15 km/h.

a) If the boat does not start, what is the distance traveled by the boat with the current in 30 minutes?

b) Assuming the water is still and the boat starts up, what is the speed of the boat at that time?

Question 1: When it comes to the speed of means of transport such as motorbikes, cars, trains, airplanes, etc., people talk about it.

C. the maximum achievable speed of that vehicle.

Verse 2: Uniform motion is motion with magnitude of velocity

A. remains constant throughout the time the object is in motion.

B. remains constant throughout the journey.

C. is always kept constant, while the direction of velocity can be changed.

D. Sentences A, B, and C are all correct.

Question 3: Which of the following is uniform motion?

B. The 100-meter runner is reaching the finish line.

C. The plane flies from Hanoi to Ho Chi Minh.

D. None of the above motions is uniform.

Question 4: A person travels a distance sfirst with speed vfirst overfirst second, travels the next distance s2 with speed v2 over2 second. What formula is used to calculate this man’s average speed over both distances s .?first and s2?

D. Both B and C are correct

Through this lesson, students will be familiar with knowledge related to Uniform motion-Irregular motion along with related exercises in many levels from easy to difficult…, you need to understand: