Sets and elements of sets

– A collection of one or more objects with similar characteristics. Objects are called elements.

– Gather the students of grade 61

– The collection name is set with a capital letter.

– Elements are written in two {}

– Each element is enumerated once

– There are two ways to write a set: List the elements of the set or show the characteristic properties of the elements.

VD: Write the set A of natural numbers that leave a remainder of 1 when divided by 2 and less than 10 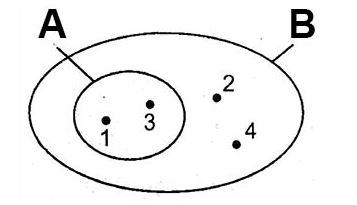 Question 1: Let the set A be the letters in the phrase “Ho Chi Minh City”

b. Fill in the appropriate symbol in the box

HS Note: The above problem does not distinguish between uppercase and lowercase letters in the given phrase.

a/ Find the word phrase made up of the letters of the set X.

b/ Write the set X by showing the characteristic properties for the elements of X.

a/ For example, the phrase “CAO CAO”

a/ Specify the subsets of A that have 1 element.

b/ Specify the subsets of A that have 2 elements.

c/ Set B is not a subset of set A because set B has element c but element c is not in set A.

Note: Any set A always has two special subsets, the empty set and the set A itself. If A has n elements, the number of subsets of A is 2n.

Question 1: Let the set A be the letters in the phrase “Arithmetic Math 6”

b. Fill in the appropriate symbol in the box

a/ Specify the subsets of A that have 1 element.

b/ Specify the subsets of A that have 2 elements.

Verse 2: How many elements are in the set of natural numbers not exceeding 5?

Question 3: How many elements does the set of elements in the sentence “GET247” include?

Question 4: The number following the number 77 is:

Question 5: The number that needs to be filled with the “…” sign in order to have an increasing dimension of less than 3 units is:

Question 6: How is the set E of natural numbers greater than 7 and less than 12 represented? Choose a correct option:

Verse 9: The set S of the months of the fourth quarter of the year is

Question 10: The set of letters contained in the word “VUI HOC 247” is

Through the lesson Collections and elements of this set, you need to accomplish some of the objectives given by the lesson, such as: