WEST AKRON — A new original documentary series by Quibi and SpringHill Entertainment will feature an in-depth look at the first academic year inside Akron Public Schools’ I PROMISE School, which opened in 2018.
According to documentary officials, the school is a unique partnership between the LeBron James Family Foundation and Akron Public Schools that creates a new model of urban public education for the students who need it most. The school’s innovative “We Are Family” approach builds a safe, nurturing and empowering environment to inspire students and their families to expect more for their futures and provides the resources to help them make them a reality.
Officials added “I PROMISE” tells the story of James’ efforts to close the achievement gap in his hometown of Akron through the eyes of the students who are resetting expectations for their futures. The series will explore the day-to-day trials, triumphs and life-changing impact of the school staff, students and families working together in a unique, family-first educational environment that embraces the trauma and challenges many face in Akron.
A first look at the series debuted at youtu.be/0BiaJotRdqM.
SpringHill Entertainment produced the series in association with Verizon Media’s RYOT and Blowback Productions. The “I PROMISE” series is directed by Marc Levin, with executive producers for SpringHill being LeBron James, Maverick Carter, Jamal Henderson, Nicholas Lopez and Philip Byron.
SpringHill Entertainment is the entertainment and content company created by LeBron James and his business partner, Maverick Carter. It develops creative content across a variety of platforms, including digital, documentary and feature films, and scripted and unscripted TV.

GREATER AKRON — The Andrea Rose Teodosio Foundation’s A Rose Project has distributed almost 300 homecoming, prom or other occasion dresses over the last two years to area young women, according to foundation officials.
The foundation, in conjunction with Goodwill Industries Serving Summit, Portage, Medina, Ashland & Richland Counties, again will offer dresses March 21 and 28 from 10 a.m. to 2 p.m. at Goodwill’s Service Center, 570 E. Waterloo Road in South Akron.
Organizers stated almost 2,500 garments in the collection, as well as a limited number of shoes, jewelry and accessories, will be available. In addition, Goodwill will offer each young woman a career assessment to help her better understand her strengths and interests and how those match with potential career paths.
“A Rose Project was started by a group of Girl Scouts in honor of Andrea Rose Teodosio and her belief in the inner beauty of others,” said Gregory Morton, vice president, mission services and public relations for the local Goodwill Industries. “Goodwill is honored to continue the tradition and excited to support those young ladies who wish to take the career assessment and plan their futures.”
The nonprofit Andrea Rose Teodosio Memorial Foundation — created in memory of Teodosio, the daughter of local judges Tom and Linda Teodosio who was killed in a skiing accident in 2011 — demonstrates values that Andrea Teodosio held close to her heart — including compassionately assisting the underprivileged and elderly, actively addressing environmental issues and promoting community service and education, according to foundation officials. For details, visit andrearose.org. 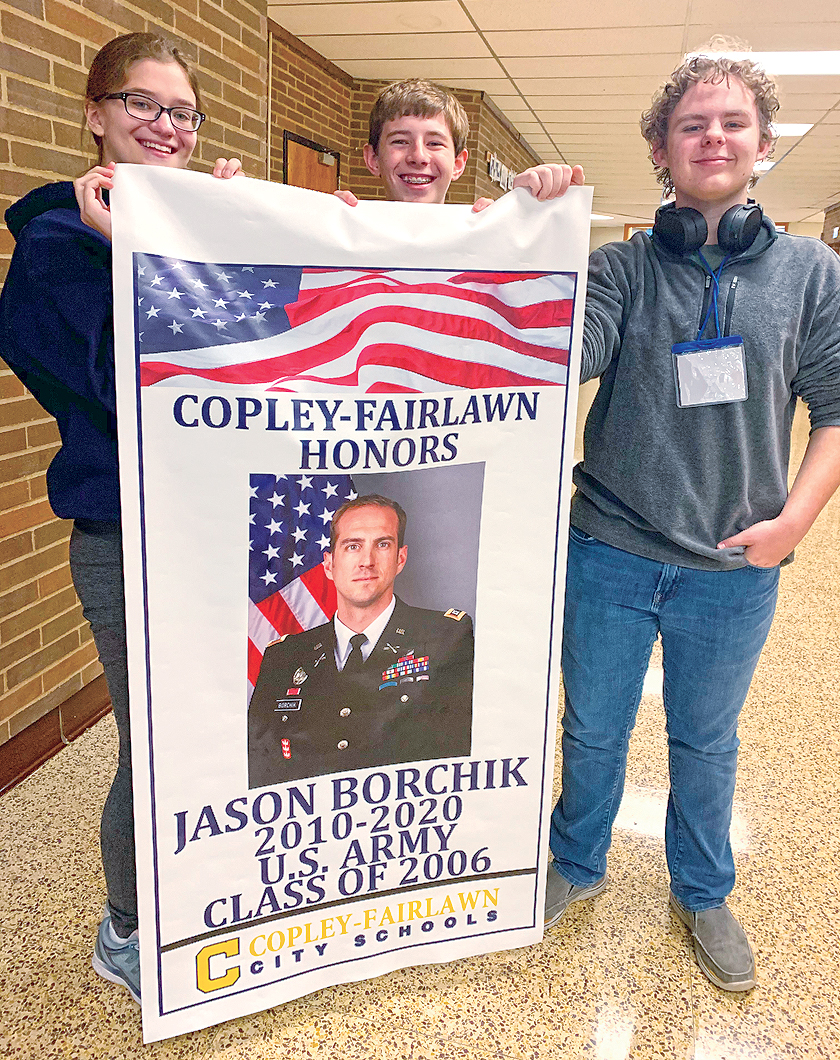 Pictured from left with one of the banners at Copley High School are students Lizzie Daniels, Tyler Allen and Julian Leff. Photo courtesy of Copley-Fairlawn City Schools

COPLEY — Copley-Fairlawn City Schools is recognizing alumni who have served or are currently serving in the U.S. Armed Forces with banners hung on light poles outside Copley High School. According to school officials, the banners showcase 32 veterans using their photos, names, year of graduation, military branch and length of service. Five will be hung at one time.
District officials stated the banners were created by the GenYes program students at Copley High School using a vinyl printer that the group purchased in 2019 after receiving grant funding.
“We wanted a way to honor alumni veterans for serving our country and let them know that we appreciate all that they have done and that they are important to our story as a district,” said Assistant Superintendent Brian Williams. “We also want to bring an awareness to students of these veterans’ service and sacrifice. It is important for students to see the respect we have for our alumni veterans.”
District officials added they are looking for more alumni veterans to honor. Applications forms are available at forms.gle/J4efredawHwNod3p8.
“We are eternally grateful to our alumni who have served, and this project highlights the importance of honoring our local veterans,” said Superintendent Brian Poe. “I am very proud of our students for bringing this idea to life, utilizing technology while sharing an important and impactful message through the Copley-Fairlawn community.”

Maria Lindsay contributed to these reports.