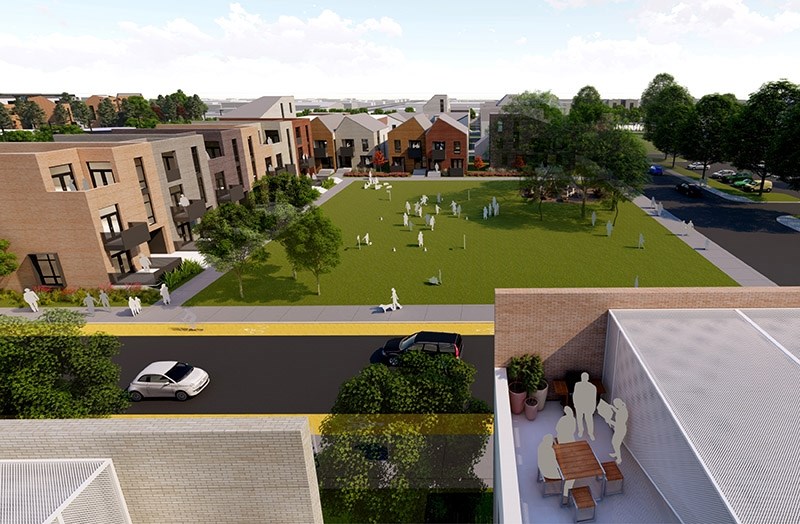 Rendering courtesy of U of A Community Design Center

The U of A Community Design Center received a 2021 Housing Design Education Award from the Association of Collegiate Schools of Architecture/American Institute of Architects for its “Re-Live Downtown Pine Bluff” plan.

Three projects led by Fay Jones School of Architecture and Design faculty at the U of A have received national awards from the Association of Collegiate Schools of Architecture.

The U of A Community Design Center received a 2021 Housing Design Education Award from the Association of Collegiate Schools of Architecture/American Institute of Architects for its “Re-Live Downtown Pine Bluff” plan. The plan proposes redeveloping select neighborhoods with multi-family units to provide attainable workforce housing and catalyze investment throughout the downtown Pine Bluff area.

“Negotiation Tables” received a 2021 Design-Build Award from the Association of Collegiate Schools of Architecture. The project, a mobile community engagement tool used to enhance communication about housing-related issues, was led by John Folan, head of the Department of Architecture, through the Urban Design Build Studio.

“All Access,” a design-build for a retail garden nursery operated by a non-profit entrepreneur in Pittsburgh, Pennsylvania, received a 2021 Faculty Design Honorable Mention from the association. Folan also led this project through the Urban Design Build Studio.

The 2021 Architectural Education Awards were announced at the ACSA 109th Annual Meeting, which was held virtually March 24-26.

The “Re-Live Downtown Pine Bluff” proposal was developed in a fall 2017 architectural design studio led by Stephen Luoni, director of the U of A Community Design Center. Luoni is also a Distinguished Professor and the Steven L. Anderson Chair in Architecture and Urban Studies at the university.

The studio prepared a downtown revitalization plan for Pine Bluff, a once-prosperous cultural urban center in the Arkansas Delta that is now the nation’s second-fastest shrinking city. The housing-first initiative focused on building neighborhoods around downtown “centers of strength” that serve as starting points anchoring the neighborhood regeneration.

The studio designed 28 walk-up housing prototypes for Pine Bluff after learning about how economy of means impacts design approaches and general decision making. They also studied missing middle housing types — and its specific urbanism — in nearby Memphis and St. Louis.

“One of the design center’s areas of long-term interest has been the design of housing in communal formats where multiple services are delivered beyond that of simply providing a unit,” Luoni said. “Here, students and staff partnered to showcase the centrality of housing environments in creating a human-centered regeneration of downtown. This is the center’s eighth housing award in the program’s 14-year history and communicates our program’s leadership on a much under-examined subject matter in architectural education.”

The “Negotiation Tables” project acts as an on-site negotiation table for community leaders, financial counselors, social counselors and residents to discuss vacancy, gentrification, displacement and need. The project was deployed in different neighborhoods in Pittsburgh, and it provided a platform to enhance communication and collect oral histories.

Pittsburgh neighborhoods were impacted significantly by urban renewal efforts that led to the loss of 30 percent of the building stock over a 20-year period. After the implementation of a community master plan in 1999, the area today is home to a diverse population from a large range of socioeconomic backgrounds, but that diversity is being threatened by gentrification and displacement. Recent development has perpetuated racial and economic tensions despite strong advocacy and stabilization programs targeted at helping long-time residents. Housing is being constructed for all income levels, but inclusivity remains elusive.

At these on-site negotiation tables, people are engaged in conversation about their communities and can freely speak for as long as they wish. With consent, conversations are recorded, formatted and posted to the web to illustrate what issues are important to community members across the city of Pittsburgh. The intent is to collect a large arsenal of oral histories that will create a historical narrative described by the residents of Pittsburgh.

The mobile outreach and demonstration tool enhances understanding and knowledge building that aspires to aid in addressing these challenging issues. The project offers a network of adaptable forms that can be used as a communal table for feasts in the neighborhoods, storytelling, real-time manipulation of building design in virtual reality and a theater.

The design objectives for the “All Access” design-build were to use vernacular strategies for the passive control of air, light and water; demonstrate what can be done with reused/recycled materials; and employ construction strategies that could be completed by people with knowledge bases and skills still in development. The site lease prohibited the installation of permanent structures, so the design employs principles of component-based pre-fabrication and design for deconstruction.

Predicated on systems for mass production, the structure developed for the retail garden nursery, Floriated Interpretation, demonstrates how universal components from the “All Access” system can be integrated into the creation of a site-specific design.

The project engaged the local community, including local youth, artists, trade apprentices and university students, who came together to paint the roof graphic. Materials for the project were harvested from deconstruction projects and overstock, which diverted waste from landfills. The tailored features of the “All Access” system are intended to help Floriated Interpretation operate more effectively while promoting community unity and empowering youth.

“The success and recognition for these projects is truly a reflection of the many hands and minds that were invested in realizing them,” Folan said. “Both have had an impact in the communities they emerged from, and both have addressed needs identified by the residents of those communities. As much as the recognitions address the projects themselves, both projects are extensions of processes predicated on listening.”