You are here: Home / Business / One year after MGM, some business see more customers, others ask why empty storefronts remain – MassLive.com

He sees a “whole new customer base” both here and at his main store in Tower Square a few blocks north.

“I ask myself every time I walk there,” Oundjian said. “Why isn’t anyone moving there. That’s like the million-dollar question.”

Or the $960 million question. That’s how much MGM Resorts International spent developing the casino in Springfield’s South End with the promise of spurring business development in the neighborhood. The casino opened a year ago, Aug. 24, 2018. 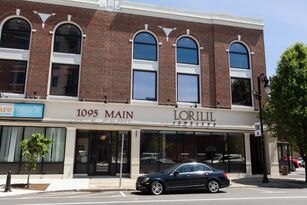 Some development is in progress around the South End but hasn’t materialized yet.

MGM’s real estate partner, Davenport Companies, is building a $2 million CVS store in its Davenport Square site across Main Street from the casino. Balise Auto Group is building a $6 million Mazda dealership on property it has acquired over the years adjacent to its Hyundai dealership. And there are hotel and apartment proposals for the old York Street Jail site, where city development efforts have been frustrated for years.

Some merchants in the area report few, if any, new customers from the casino.

“In a week maybe we see 10 new faces,” said Rico C. Daniele of Mom & Rico’s Specialty Market. “It’s not like I expected.”

He blamed the underwhelming impact in the local business district on a lack of cooperation between MGM and the neighborhood. One example: The Loop shuttle bus service doesn’t stop on his section of Main Street. Davenport Companies has a deal with CVS across to build a $2 million store in its Davenport Square property across Main Street from the $960 million MGM Springfield. Irving also has an agreement in place to build $3 million Cumberland Farms gas station and convenience store a few blocks away at the old Registry of Motor Vehicle site on Liberty Street.

Cigarettes are expensive in the MGM Springfield gift shop, said David Glantz, owner of Buckeye Bros. tobacco and lottery shop on Main Street, where smokes sell for the state minimum. He said he sees his share of casino customers.

“I think it’s a great thing for downtown Springfield. It’s the biggest economic development that ever happened in the city,” Glantz said. “Thought there would be more economic spinoff, especially with restaurants and bars.”

Glantz said the neighborhood could use a Ninety-Nine or a Chili’s, familiar chain restaurants that appeal to out-of-towners. He said he’s heard that landlords have high asking prices for property near the casino, preferring to let it sit empty rather than come down in price.

The layout of MGM Springfield, with its outdoor plaza concert space and doors that open out onto the street, was meant to boost the impact the casino, and its crowds, have on Springfield.

“I know the casino industry is looking at Springfield as an interesting experiment,” said Karl Petrick, associate professor of economics at Western New England University.

“The idea was this was going to push patrons out to local restaurants. Like Red Rose, etc.,” Petrick said. “Other than beautifying Main Street, I don’t know if a lot of patrons are spilling out of the casino looking for places to eat, etc.” 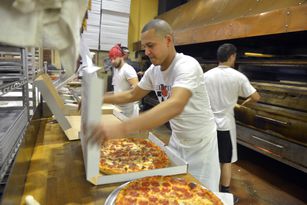 Rita Caputo-Capua, one of the owners of Red Rose Pizzeria, said her 56-year-old family business has benefited from the casino. Work begins Oct. 1 on an expansion with a second kitchen to handle the crowds.

“Everything is going great,” Caputo-Capua said. “Everything’s been busy. It’s been awesome. No regrets. They’ve been very good neighbors to us.”

Some customers were concerned that they’d have trouble parking at Red Rose once MGM opened. But soon customers learned that it wasn’t the case, she said.

Unsurprisingly, MGM Springfield President and CEO Michael Mathis said the casino design is working and will work better when forthcoming developments like the new CVS and the rebuilt Paramount Theater are finished.

“The porous design of our resort is something that is very special to us,” Mathis said this week during a wide-ranging meeting with reporters. “No one feels like they are getting corralled past slot machines, past any part of the resort.”

“I think we wouldn’t change it for the world,” Mathis said. “As Main Street becomes more activated, you are going to see more people bouncing back and forth.”

Mathis also referenced the promise of the Wahlburger’s restaurant adjacent to MGM on casino property. But construction hasn’t begun and the Wahlburger’s website doesn’t list the Springfield location as coming soon. This despite actor Mark Wahlberg coming to Springfield a year ago to promote the location.

Mathis said MGM Springfield draws thousands more visitors each day than it can feed at its eateries and house in its hotel rooms.

“There are new hotels being proposed all the time,” Mathis said. 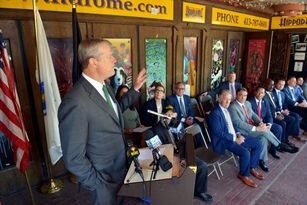 The 85-room hotel should be done by December 2020, and the theater renovation will be done a year later.

The New England Farm Workers Council and Main Street Hospitality — owner of the Red Lion Inn in Stockbridge and operator of historic hotel properties around New England — plan an 85-room hotel as part of the Paramount Theater rehab project.

MGM’s downtown events, like this month’s Aerosmith concerts at the MassMutual Center, drive restaurant business. That goes for places like Theodores’ on Worthington Street, said Keith Makarowski, one of the owners. But what about a night when MassMutual and Symphony Hall, both now managed by MGM, are dark?

“Really no difference,” Markowski said. “Which is good. We thought initially it might pull away business.”

Proximity to the casino seems to be a positive for Nadim’s Downtown, a few blocks closer than Theodores’.

“Fantastic, unbelievable,” owner Nadim Kashouh said of business since MGM opened. “I wish it had happened a long, long, time ago.”

“Every day of the week has been fantastic,” he said. “The whole city has such a vibe to it. Everybody wants to be down here.” 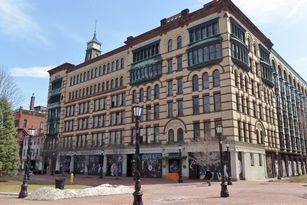 Market-rate housing, an amenity promised by MGM but not yet delivered, would help make the neighborhood feel more alive on evenings and weekends, Kashouh said.

The city encouraged MGM to fulfill its commitment to build housing through long-sought rehab of 13-31 Elm St. on the city’s Court Square.

The project calls for 74 market apartments, with the majority of the ground floor turned into retail, restaurant and commercial space. It is clearing its “final hurdles,” said Michael O’Brien, the Winn Companies executive in charge of the project.

“I am guardedly optimistic we have overcome and solved nearly all the Herculean challenges for the redevelopment of 13-31 Elm,” he wrote in an email. “’We’ collectively refers to the City, Springfield Redevelopment Authority, State, MassHousing, MGM, another private sector partner and OPAL/ Winn.”