You are here: Home / Business / Here are the economic issues that will define the year until Trump’s 2020 reelection bid – CNBC

As President Donald Trump latches his reelection bid to a strong economy, he has to tread carefully to prevent it all from unraveling before November 2020.

Sunday marks a year until voters decide whether Trump will get a second term in the White House. The economy is perhaps the president’s best hope for winning four more years. The Trump campaign clearly thinks it has a good economic story to tell — even if many voters will care more about the president’s health care or immigration policies, or concerns that he has abused his power or endangered national security.

A healthy economy usually bodes well for a president’s reelection chances. An unemployment rate near the lowest in decades and steady GDP growth have most Americans feeling good about the economy as 2020 approaches. But risks from tariffs to U.S. manufacturing weakness threaten to poke holes in the president’s economic narrative during the election year.

(This is the second of two CNBC stories taking stock of the year to come before Election Day 2020. The first, about legal and political issues, was published Saturday).

Trump has a chance to at least move toward achieving two of his key economic goals in the coming months. He will push for approval of his North American Free Trade Agreement replacement and seek a deal to resolve some gripes with China’s trading practices. Still, his potential 2020 opponents have argued he failed to follow through on his promise to lift the working class amid lingering concerns about income inequality and untenable health care costs.

The fate of Trump’s economic agenda — and whether he can end his trade war with China before it causes more damage — also has stakes for congressional races. Republicans and Democrats will fight for control of the House and Senate next year, with several races that could swing the power balance in states where trade conflicts have created uncertainty for businesses and consumers.

If consumer feelings about the economy stay as strong as they are now into next year, it would historically suggest a good chance of a second Trump term in the White House, according to Richard Curtin, the director of surveys of consumers at the University of Michigan. Still, history can only go so far in interpreting what will happen in the unpredictable Trump era.

“If we simply extrapolate from the past we would expect a Trump reelection, but the past really isn’t a good forecaster of how people are interpreting current economic conditions,” Curtin said.

In an ad rolled out during Wednesday’s deciding World Series Game 7, the Trump campaign started its appeal to voters by pointing to the economy. In the video’s opening seconds, it highlighted both the total jobs and manufacturing positions the U.S. has added during Trump’s time in office.

Trump framed his argument more simply during a campaign rally in Louisiana last month: “The United States has the hottest economy on earth.”

During a first term marked by backlash to Republican efforts to repeal the Affordable Care Act, the Trump administration’s decision to separate migrant children from parents and allegations of executive overreach that sparked an impeachment probe, the economy has largely given Trump shelter from criticism.

Job creation chugged along in October, while the unemployment rate of 3.6% hovered near a 50-year low. While gross domestic product growth has slowed, trailing the Trump administration’s projections, GDP still increased by a steady 1.9% in the third quarter.

Consumer sentiment, which gauges Americans’ outlook for their economic prospects, rose to 95.5 in October from 93.2 in September, according to the University of Michigan. It’s a level Curtin describes as “quite favorable,” and one that would indicate success for an incumbent if it lasts into the first quarter of an election year. 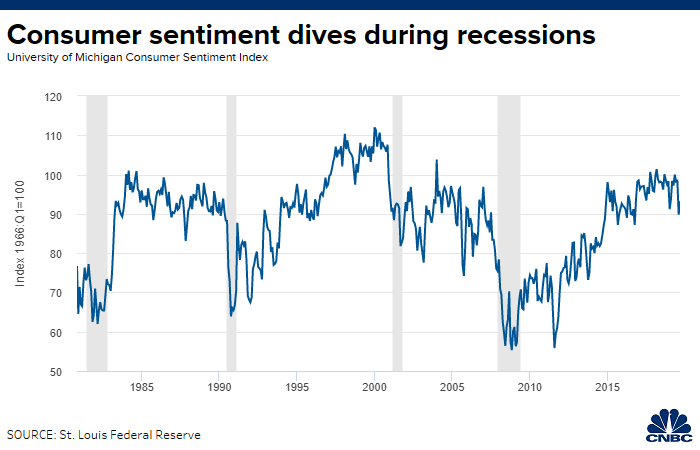 Trump has repeatedly boasted when major U.S. stock indexes rise, and did so again Friday as the S&P 500 and Nasdaq hit record highs. Curtin says some voters associate a strong equities market with growing retirement savings, even if it does not necessarily reflect the broader health of the economy.

Last month, Curtin wrote that “most incumbents” have won during peaks in consumer sentiment. But he added that “intense partisanship” in views of Trump’s economy — Republican optimism and Democratic pessimism regardless of current conditions — “may upend traditional relationships” even if economic numbers remain strong.

In most public opinion surveys, voters have given Trump better reviews on the economy than they have on any other issue, including foreign policy, national security and health care. Last month, 48% of voters said they approved of the president’s handling of the economy, and the same percentage said they disapproved, a Quinnipiac University poll found.

Just shy of two-thirds of respondents, or 61%, described the economy as either excellent or good, while 36% deemed it “not so good” or poor. Even so, concerns about a slowdown have grown in recent months.

More than half — or 56% — of respondents to the Quinnipiac survey said they think a recession is either “very” or “somewhat” likely in the next year. Among independents, a critical group to gauge on economic sentiment ahead of elections, 61% believe a recession is very or somewhat likely.

Tariffs, particularly the duties the U.S. and China have slapped on more than $500 billion and $110 billion of one another’s goods, respectively, have increased fears about an economic downturn and rising costs for consumers. Americans surveyed by the University of Michigan mentioned tariffs as an economic concern more often than any other issue in October, but less often that they did in September.

Trump hopes to soon ink a partial “phase one” deal to resolve parts of his trade dispute with China, which he will likely claim on the campaign trail as proof that he followed through on his 2016 pledge to crack down on Beijing. Even so, the agreement may not remove the tariffs Trump has used to try to force China to change its practices. If the tariffs linger, many of the president’s economic opponents will be eager to argue he has jeopardized a strong economy while failing to follow through on some core campaign promises.

Take manufacturing, which tariffs can affect because of the cost of both inputs for American companies and U.S. exports. Candidate Trump argued he would revive American manufacturing and compel companies to produce goods in the U.S. But in October, a key gauge of manufacturing contracted for the third straight month as trade concerns simmered.

It’s not the only Trump campaign pledge Democrats could seize on next year as an example of a broken promise. For instance, the 19 Democratic presidential primary candidates have uniformly slammed the 2017 GOP tax law as a giveaway to the wealthy and corporations at the expense of the working class that Trump pledged to boost.

“The wealthy didn’t need [the tax cuts] in the first place. The corporations have spent them on stock buybacks,” former Vice President Joe Biden said during a campaign speech in the battleground state of Pennsylvania last month.

Trump appears to have two main points on his economic checklist that fit his political aims. He wants to ink some kind of trade deal with China, potentially by later this month. He would hope to use an agreement — however limited — both as evidence that he forced China to change its practices and that he looked out for American farmers by getting Beijing to buy more agricultural goods.

The president and Senate Republicans running in pivotal 2020 races in states such as Arizona, Iowa, Georgia and North Carolina have also pushed for ratification of the United States-Mexico-Canada Agreement by the end of the year. House Democrats are currently negotiating with the Office of the U.S. Trade Representative as they try to iron out concerns about Mexico enforcing new labor laws under Trump’s replacement for NAFTA. 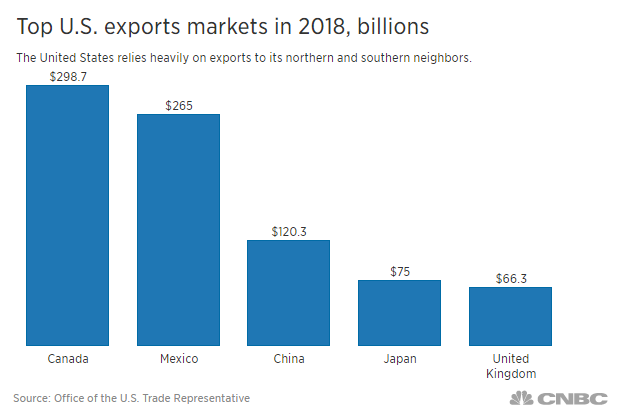 “I’d like to have it done as soon as it’s ready,” Pelosi told Bloomberg News on Friday. “I wouldn’t rule it out next year. Hopefully we can do it sooner, but I said when it’s ready we’ll do it.”

Critics of NAFTA hope the rules will stop U.S. companies from moving jobs to Mexico. Leading Democratic presidential candidates from Biden to Sens. Elizabeth Warren, D-Mass., and Bernie Sanders, I-Vt., have voiced concerns about USMCA. Mexico has ratified the deal, but the U.S. and Canada have not yet approved it.

Trade does not typically figure heavily in voters’ considerations when they head to the polls, according to Jennifer Hillman, a senior fellow for trade and international political economy at the Council on Foreign Relations. However, because the damage from global tariff battles has been “highly targeted” in major agriculture and manufacturing states, the issue has become more important in certain communities, she said. Those include potential 2020 battlegrounds such as Michigan, Minnesota, Iowa and Wisconsin, among others.

Hillman noted that neither USMCA nor the developing “phase one” China deal would make changes as significant as Trump makes them out to be. Still, it may be difficult for Trump’s Democratic opponent to prove the agreements have not measured up to Trump’s lofty promises.

“None of these agreements will have been in effect long enough to have any sense of whether they’re effective,” she said.

A general sense of confusion created by the global trade conflicts looms over all of the deals. A lack of clarity about what tariffs businesses will pay and when can significantly affect business decisions.

If China and the U.S. lob threats back and forth or get cold feet about a potential deal, stocks could drop, as they have at several points this year. The White House looks at equities as a measure of the president’s success.

Creating a sense of economic stability may prove as important as anything else Trump can do in the next year, according to Hillman.

“It’s the uncertainty and the chaos that the administration has created that is a real drag on the economy. … To the extent that Trump can move to do things that create certainty then I do think he gets a boost in the stock market and generally the economy,” she said.