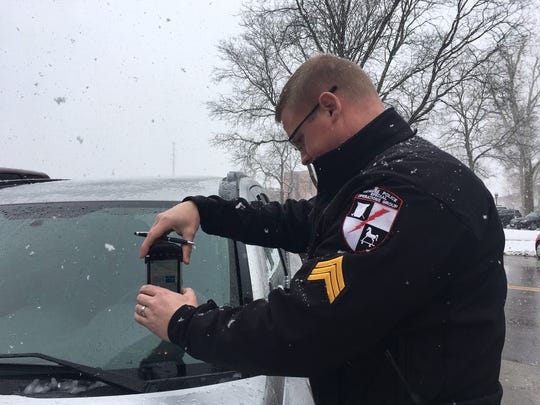 In January, Newark police officers began issuing electronic parking citations after its electronic program went live. As of Aug. 23, Newark police Sgt. Doug Wells said the agency has issued 466 parking tickets through that program – a number he estimates is double the number they used to issue.

Steve Layman, who works for Shai Commercial Real Estate and is a board member of Newark Development Partners and the Special Improvement District, said enforcement has made parking on the street available for people who come to visit downtown Newark.

“It used to be that all the employees took all the spaces so those who were coming down couldn’t find any place to park,” he said. “Now the employees are seeking other places.”

According to Layman, downtown property owners passed the Special Improvement District, which essentially tax themselves to pay for parking enforcement. The intention, he said, was to make parking available for customers. He added it seems to be working.

More: Downtown Newark: From vicious to delicious cycle for business

Alex Athan, managing partner for Barrel & Boar, said word is getting out that parking is not the problem it had been years ago.

“Parking is not as bad as it used to be,” Athan said. “I think it’s that (old) perception. I think people are starting to learn and starting to see it. Lunches have improved here since the Special Improvement District started monitoring parking.”

Teri McKenna Misner, an owner of the newly opened McKenna’s Market, said when they come to a new town, customer parking availability is the first thing her father talks about.

“Here, I think the parking enforcement is real important because again, we’ve got to be able to move this traffic,” she said. “I’ve got to have it convenient for people. I can’t just have downtown people for a walk-up.”

She added their business will eventually be opening on Sundays because there will be plenty of parking Saturdays and Sundays when there won’t be business people downtown.

“Ever since they started enforcing it with a patrolman that’s coming unannounced…it’s worked good,” Ehret said. “We used to have a lot of customers come in and say ‘there’s just no parking down here’…ever since they’ve done that, it’s really very, very few comments, if any.”

Ehret said it likely hurt their business when people came around and didn’t find any parking spaces available.

“It’s hard to say what sales we would’ve lost on that,” he continued. “Now if they can get a parking place, we have a shot at making that sale because you’re going to get them into our store and go from there.”

Prior to receiving the electronic ticketing devices, Wells said Newark police officer used to hand-write them on a form, which said who the owner was, what the citation was, and for how much.

“I know we weren’t anywhere near this number when we were doing the paper tickets, so I would say we’ve doubled the number of tickets,” he said.

Wells explained the officer writes each ticket via a electronic ticket, then uploads the tickets to a computer program when they get back to the station. Eventually the intention is the program would keep a ticket for the police department and automatically send one electronically to Licking County Municipal Court, however the portion of the program sending information to court is still being built. 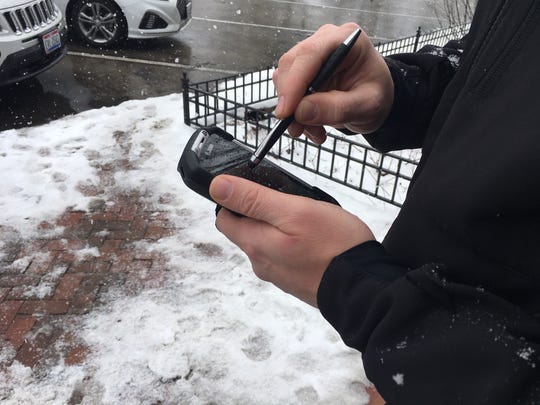 Currently officers are printing off the tickets and physically taking them to the courthouse. The new program, Wells said, will save the costs of paper and the time it takes an officer to hand-deliver them.

“The device allows (us) to enter more license plates and come back and cite those more efficiently because I now know…the plate was chalked at this time and two, three hours later it’s still there – it gets a ticket,” he said. “It allows us to increase our number of vehicles we can input at one time where before I’ve got to walk around and chalk the cars.”

Wells explained it’s no longer legal to physically chalk a vehicle to enforce parking, however, the department has determined e-chalking vehicles is legal.

As the face of downtown Newark has changed in recent years, Layman said the area has lost a lot of parking spaces. Center street parking disappeared, then the addition of the roundabouts subtracted more spaces.

“There’s still plenty of parking, but just not in front of businesses,” he said. “We have to make room for customers if we want to have thriving businesses. It’s pretty simple.”

As an employee who works downtown, Layman said he tries to be conscientious about how long he parks downtown and where he parks, however, he admitted he’s gotten his fair share of parking tickets.

“Twenty dollar tickets are expensive if you get multiple ones. It adds up,” Layman said. “I’ve probably been getting one ticket a month since they’ve been enforcing it, so I’m painfully aware that they’re doing it. I understand the purpose and that’s part of the deal.”

“I think it’s been beneficial for the downtown businesses,” Sutton said, adding the only thing he could potentially see of value is having a conversation about shoppers and diners having enough time to eat and shop in a two-hour window. “I don’t think as a downtown we want to discourage people to come down, so I think there could be value in (asking)…what’s the right limit.”

Looking forward to the future of downtown, Layman said parking enforcement will need to continue long-term.

“As soon as we stop, the employees will just take all of the spaces again. It’s just human behavior. It’s natural behavior,” Layman said. “I think for the future of downtown Newark, parking enforcement will have to continue.”