China is finding a way to cushion its economy from U.S. tariffs, which have already hit $250 billion of its goods, with more on the way.

With China’s economy already growing at its slowest pace since 1992, and its industrial output at a 17-year low, Beijing has resorted to weakening its currency and using transshipments to prop up its economy. Transshipments involve sending goods to other countries before shipping them to the U.S.

“If US tariffs were the main culprit, one would expect China’s exports to have weakened more than exports from elsewhere,” wrote Julian Evans-Pritchard, senior China economist at the London-based Capital Economics. “Instead, China’s share of global exports actually edged up during the past year.”

China has let its currency, the yuan, weaken by 5 percent in trade-weighted terms over the past 14 months. On Aug. 5, the yuan fell below seven per dollar for the first time since 2008. A weaker yuan makes Chinese goods cheaper for overseas buyers, which helps offset the impact of tariffs.

“China has strategically gamed the tariffs by slashing their prices and by devaluing their currency,” White House trade advisor Peter Navarro told “Fox News Sunday” following the yuan sliding to a more than one-decade low.

And while a weaker yuan has garnered a lot of attention, another tactic China is using has flown a bit more under the radar.

Evans-Pritchard says it’s difficult to come up with the exact impact of transshipments, but he has come up with a back-of-the-envelope calculation.

If there were no trade war, Evans-Pritchard says China’s exports to both the U.S. and Association of Southeast Asian Nations (ASEAN) would be broadly in line with the rest of the world, but that’s not what is happening.

“Since the start of the year, exports to the US have underperformed those to the rest of the world ex-ASEAN by 10 percentage points,” Evans-Pritchard wrote. 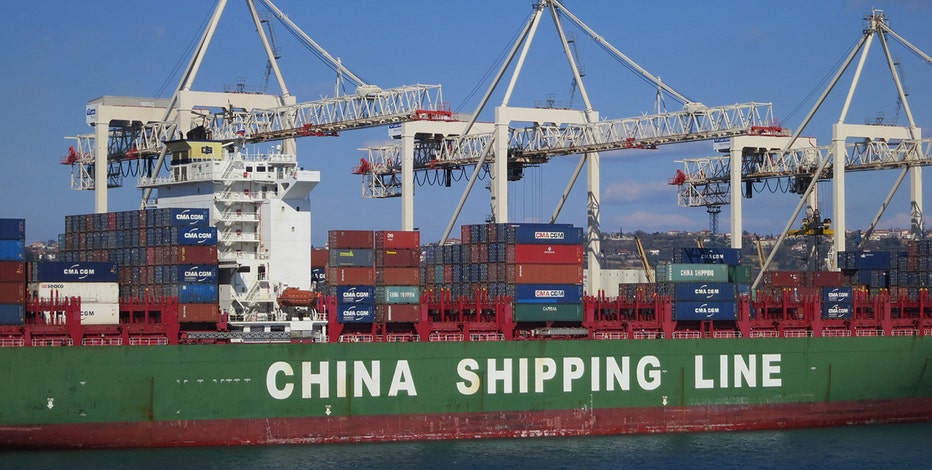 This huge “China Shipping Line” container ship is unloading containers with goods from China, in port of Koper in Slovenia. Photo was taken March 7, 2015.

“This points to a 0.3%-pts drag on GDP growth, in line with what we had expected from the first few rounds of tariffs introduced last year. Meanwhile, exports to ASEAN have outperformed those to the rest of the world ex-US by 7%-pts since the start of the year.”

He concluded: “This hints to a prop to GDP growth from transhipment of 0.15%-pts, potentially offsetting roughly half of the drag from tariffs.”

The Trump administration has taken notice of these transshipments, but has yet to take any formal action.

“Vietnam takes advantage of us even worse than China,” Trump told FOX Business’ Maria Bartiromo in June, saying the U.S. is in discussions with the Asian nation.

The White House did not immediately respond to FOX Business’ request for comment.