You are here: Home / Business / Business owners at The Banks to city: Cut the politics and build the music venue. – Cincinnati.com
CLOSE

Here’s a walk-through of what the planned music venue at The Banks will look like. Plans are complete and ready for construction, according to Music & Event Management, Inc.
Provided, Cincinnati Enquirer

The winters are harsh at The Banks.

Business dips anywhere from 20-50 percent for restaurants after baseball and football season, owners told The Enquirer.

So the business owners of several restaurants gathered Tuesday morning to send a message to local leaders: put politics aside and build a music venue.

“I think it’s incredibly disappointing to think about it not happening,” said Jim Moehring, co-owner of the Holy Grail sports bar next to Great American Ball Park at The Banks. “I think our biggest thing now is, politically, get out of the way. It’s time.”

Moehring was one of the 14 business owners who signed a letter addressed to Cincinnati Mayor John Cranly and Cincinnati City Council asking for them to support the construction of a music venue.

The Cincinnati Symphony Orchestra has plans to build a music venue right by Paul Brown Stadium. 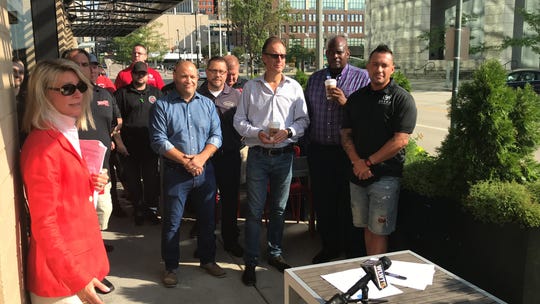 Business owners at The Banks gathered at the Taste of Belgium’s patio to call for the completion of the long awaited music venue (Photo: Scott Wartman/The Enquirer)

“The new music venue is designed to bring 250,000 concertgoers to The Banks during the October-May months, right when our businesses need them the most,” the letter signed by The Banks business owners stated.

But before the music venue can open, the city and Hamilton County must come to an agreement on moving the concrete company, Hilltop Basic Resources, to Queensgate and Lower Price Hill.

The relocation of Hilltop is necessary for the Bengals to allow for the music venue to be built next to the stadium.

A letter written by Mayor John Cranley indicated he might not be on board with the plan, outlining several concerns about moving Hilltop and the location of the music venue.

Hilltop’s proposal to relocate will be discussed Tuesday night at 6:30 p.m. in the Price Hill Recreation Center for a meeting of the Cincinnati City Council’s Economic Growth and Zoning Committee.

Business owners believe the future of The Banks is in the hands of the city leaders.

“I think the county is in full support from what my understanding is,” Moehring said. “It’s just a matter of making sure that all the city folks get on board with it. Now’s the time. It’s just languished.”