You are here: Home / Bitcoin / Bitcoin: On The Verge Of A Price Rise

The current technical picture of Bitcoin (OTCQX:GBTC) is balanced. I say that as Bitcoin (COIN) has lost most of its momentum, plus, its support and resistance lines are narrowing down to a single focal point. This gives an indication to traders that there is going to be a big change in price directionality. Thus, in this article, I shall analyse the probability of a price rise, as I am bullish on the cryptocurrency. Hence, to ascertain the likelihood of this occurring, I shall look at the fundamental news affecting Bitcoin, whilst, also analysing the charts using technical analysis tools.

Google has recommenced cryptocurrency-related advertising, after it had previously banned it in March 2018. The removal of this ban will allow regulated cryptocurrency exchanges to build their advertisements on Google’s platform in Japan and the United States. It is presently unclear why Google is lifting the ban, but it looks like the firm is planning to cash in on the cryptocurrency hype. Moreover, this is a follow up on the decision made by Facebook to remove its ban on certain cryptocurrency adverts. This news is very positive for Bitcoin, as it shows that the acceptance rate for cryptocurrencies is on the rise.

Port of Valencia’ management has announced that it is searching for ways to utilise blockchain technology to create a smart port. This decision was arrived upon, as the use of blockchain shall improve the logistics network, whilst, also lessening maintenance times.

Moreover, the port of Abu Dhabi has launched a blockchain based platform, called “Silsal”. This platform is expected to increase efficiency levels, as it shall reduce paperwork. Furthermore, this platform will enable freight forwarders and customers to get real time status updates.

The acceptance of Blockchain technology by these governments is one of the reasons I am bullish on Bitcoin. I say that as this shall popularise the use of cryptos and blockchain technology as more users will come aware of its benefits. This in turn shall help boost it’s price levels down the road.

The Iranian government announced that it will recognize cryptocurrency mining as an industry. This decision came into effect due to the regime facing intense pressure to adopt cryptocurrencies, as this will help mitigate the effect of economic sanctions. Additionally, cryptocurrency mining shall facilitate smoother trade between Tehran and its trading partners. The Secretary of Iran’s Supreme Council of Cyberspace, also revealed that the Central Bank of Iran is preparing a policy framework for the cryptocurrency industry and is planning to launch its own cryptocurrency.

I believe this news will help facilitate a bullish rise for the whole cryptocurrency market. I say that, as Iran will utilise cryptocurrency mining as a means of transforming its oil payment mode with India and China. I am considering this as an option, as Iran just a few months ago convinced the Indian and Chinese governments to utilise Iranian tankers to transport crude oil. This in turn helped Iran sell all its crude output, as they managed to side-step the effect of certain sanctions. The key reason both the Indian and Chinese government agreed to this deal, is due to Iran covering all costs and risk associated with the transport of crude.

Thus, I expect Iran to use a similar tactic to ease its payment issues. The main reason, I believe India shall agree to use cryptocurrency as a payment method is due to the skyrocketing price of fuel in India. Thus, any discount offered to India in exchange for an alternate payment method would be accepted as this would ease the pressure of fuel costs on the Indian economy. Moreover, it will also aid India in lowering the value of the US Dollar to the prior levels of Rs 60. Furthermore, I believe a significant discount on Crude, would go a long way in convincing the Chinese to make a change in certain cryptocurrency policies; As this would also help lessen China’s oil import bill, whilst, also reducing the cost of production.

In December 2017, CBOE and CME launched Bitcoin future contracts which resulted in the cryptocurrency reaching a high of $20,000. After the successful launch, several firms filed applications to launch Bitcoin ETF’s, but, they were all rejected by the SEC.

However, the launch of a Bitcoin ETF is now looking more likely, as the SEC has rescheduled the deadline of reviewing nine Bitcoin ETF applications from three different applicants. If an ETF approval does occur then this will push the value of Bitcoin through the roof. I expect this price rise to occur, as an ETF will enable more mainstream investors to purchase Bitcoin, as they wouldn’t have to directly invest in the underlying cryptocurrency asset. 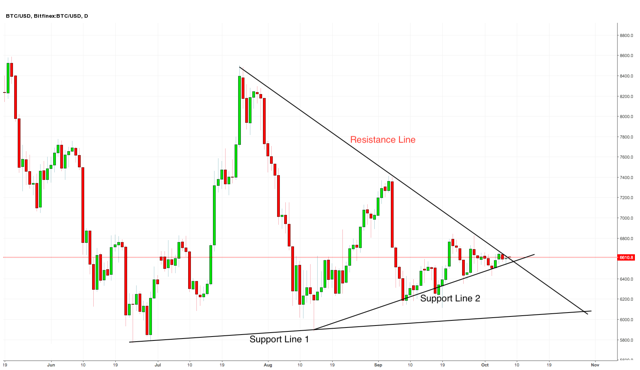 The price of Bitcoin for the past few weeks has been in decline, but that has brought out a balance in the cryptocurrency’s technical picture. The balance in the technical picture formed due to the RSI moving in an identical pattern between 40 and 50, This in turn diminished the momentum levels present in Bitcoin. Moreover, the uptrend support and downward resistance lines have been contracting progressively. Thus, due of all this, I expect a big price move in the coming week. 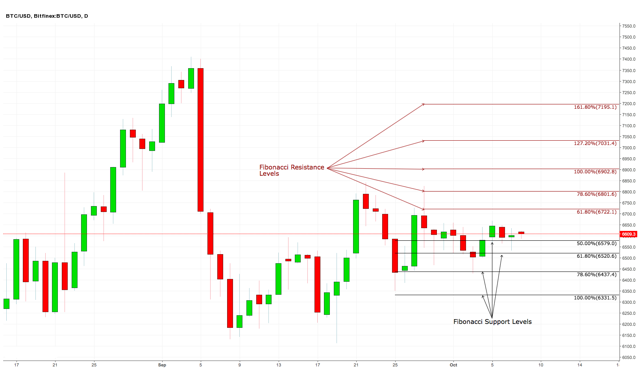 The cryptocurrency’s daily chart indicates that in the coming days, Bitcoin shall be having a large snappish move. I say that as the candlesticks have been getting smaller as they go along, thus, indicating that a big price move is ahead. However, I am positive that the snappish move will be on the upside as Bitcoin has taken support from the short-term exponential moving averages. Moreover, the prior four candles have taken support from the 50% fibonacci level at $6,579. This in turn has enabled the price to cross above the 20-day moving average.

In conclusion, I am leaning towards the bulls being in the driver’s seat. This notion of mine is fuelled by the fact that the technicals and fundamentals support an ascent. However, whichever way you decide to trade, do ensure that you utilise trailing stops, as this shall aid in capital preservation which is of prime importance.

Disclosure: I/we have no positions in any stocks mentioned, but may initiate a long position in BTC-USD over the next 72 hours.

I wrote this article myself, and it expresses my own opinions. I am not receiving compensation for it (other than from Seeking Alpha). I have no business relationship with any company whose stock is mentioned in this article.